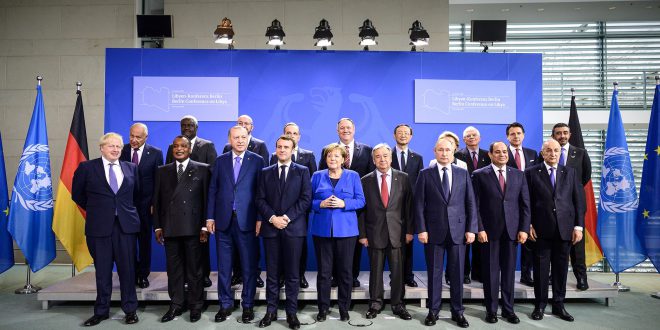 World powers are meeting in Berlin on Wednesday to seek lasting peace in Libya by ensuring the conflict-racked North African country stays firmly on the path towards general elections on December 24.

Representatives of Libya’s interim government will join US Secretary of State Antony Blinken as well as the foreign ministers of France and Egypt at the United Nations-sponsored talks.

The efforts to end a decade-long spiral of violence in Libya would be the second round in Berlin, after the first attended by the presidents of Turkey, Russia and France in January 2020.

Ahead of Wednesday’s talks, German Foreign Minister Heiko Maas reminded participants of pledges made last year for an end to international meddling and for foreign fighters or troops to withdraw.

“Those who promised to withdraw last time in Berlin have not kept their word,” said Maas in an interview with Die Welt daily.

“For the Libyans to determine the fate of their country again, the foreign forces must leave. The transitional government has also made that clear,” he stressed.

The UN estimates 20,000 foreign fighters and mercenaries are still in Libya – a presence seen as a threat to the UN-recognised transition leading to the elections.

Libya has been racked with chaos since a NATO-backed uprising toppled longtime ruler Muammar Gaddafi in 2011.

The country was subsequently split between the UN-recognised Government of National Accord (GNA) in the capital, Tripoli, and a rival administration based in the country’s east, each backed by armed groups and foreign governments.

In April 2019, renegade military commander Khalifa Haftar and his eastern-based forces, backed by Egypt and the United Arab Emirates, launched an offensive to try and capture Tripoli.

His 14-month-long campaign collapsed after Turkey stepped up its support of the Tripoli government with advanced military hardware, troops and thousands of mercenaries.

In October, after Turkey-backed forces of the GNA routed those of Haftar, the two camps agreed to a ceasefire in Geneva.

The security situation in Libya has been slowly improving since. However, the UN recently warned progress has stalled, notably on a key requisite of the polls – the pullout of all foreign soldiers.

Western leaders have repeatedly called on the foreign fighters to depart. But Russian mercenaries supporting Haftar’s side in the east are still in place.

But any withdrawal is also a delicate balancing act, said the German foreign minister.

“Foreign forces must leave the country in a gradual and uniform manner, so that there won’t be a sudden military imbalance that could be used by one side for a sudden offensive,” said Maas.

Jalel Harchaoui, Global Initiative senior fellow and an expert on Libya, also said the talks could bring tangible help on the upcoming elections.

“Somebody could come up with a good idea of agreeing on a constitutional basis in July and be on course for elections in December,” he said, referring to a key requisite for the polls. “I think there’s a good chance [for elections by year’s end] and the Berlin process could help.”

Claudia Gazzini, of the think-tank, Crisis Group, warned the road to long-term peace in Libya was still long, but the conference could bring new dynamism into the process.

“The Libyan parliament and the executive were not able to drive the process forward alone,” Gazzini said. “This was why tensions between rival groups had increased again in recent times.”

Harchaoui also warned the electoral process could be damaging to the current peace.

“This single focus on really making the elections happen this year … has a reckless aspect to it because … elections are not an end to itself. If they are happening in the wrong moment they could deepen polarisation, they could offer an environment that is propitious to another form of war,” he said.

“Any realist must acknowledge that – and that’s a sad thing to acknowledge – that this weird peace that Libya has enjoyed over the last 12 months actually owes to the presence of foreign mercenaries on both sides. That’s what it comes down to, and of course it’s not politically correct to say.”