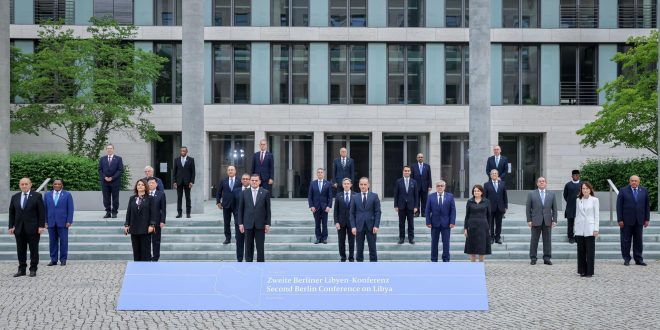 Libya’s transitional government underlined its commitment to holding elections on December 24 at a conference Wednesday with powers that have interests in the North African country, while the German hosts vowed to keep up pressure until all foreign forces have been withdrawn from Libya.

Germany and the United Nations brought together 17 countries at the conference in Berlin. Libya’s transitional leadership was joined by foreign ministers from Egypt, Turkey, Tunisia, Algeria, France and Italy, US Secretary of State Antony Blinken, and senior officials from Russia, the United Arab Emirates and others.

The meeting followed up on a January 2020 conference where leaders agreed to respect an arms embargo and to push the country’s warring parties to reach a full ceasefire. Germany has tried to act as an intermediary.

German Foreign Minister Heiko Maas said the meeting “marked a new phase” and that “we are no longer only talking about Libya, but above all with Libya.”

Participants welcomed progress since the process was launched. An October ceasefire agreement including a demand that all foreign fighters and mercenaries leave Libya within 90 days led to a deal on the elections in December and the transitional government that took office in February.

Libyan Foreign Minister Najla Mangoush said the transitional government came “with a vision of how best to re-establish stability in our country and pave the way for free, inclusive and safe elections on December 24.”

Wednesday’s conference saw powers involved in Libya recommit to refraining from interfering in the country’s internal affairs and stating that foreign forces and mercenaries need to be withdrawn “without delay” — something on which there has been little progress.

Asked what guarantees the countries involved are giving to withdraw foreign fighters, Maas pointed to the fact that they had gathered for the conference. He said that “we will not let up, and we will not rest, until the last foreign forces have left Libya … wherever they come from.”

He said Russia and Turkey, which have been heavily involved on opposite sides, understand that a withdrawal would have to be carried out “step by step” and added that it would have to be balanced, so that one side doesn’t gain an advantage.

Mangoush said there was “progress” regarding mercenaries, “so hopefully within the coming days mercenaries from both sides are going to be withdrawn,” creating more trust and leading to further steps.

A senior US official, speaking on condition of anonymity because he was not authorized to speak publicly about the closed-doors talks, said Russia and Turkey tentatively agreed to begin a process of removing foreign fighters. The official said the deal is not yet done but they are prepared to discuss an incremental withdrawal of about 300 each.

A further challenge will be to start bringing all armed groups in Libya under a joint military command.

Speaking earlier Wednesday ahead of the conference, Blinken said that “we share the goal of a sovereign, stable, unified, secure Libya free from foreign interference — it’s what the people of Libya deserve, it’s critical to regional security as well.”

“For that to happen, national elections need to go forward in December and that means urgent agreement is needed on constitutional and legal issues that would undergird those elections,” he said. “And the October 23 ceasefire agreement has to be fully implemented, including by withdrawing all foreign forces from Libya.”

Conference participants supported efforts toward a reconciliation process and committed to helping Libyan authorities “in developing a comprehensive approach to addressing migration,” including the closure of detention centers.

Aid group Doctors Without Borders said this week it was suspending its activities in two detention centers in Tripoli after “repeated incidents of violence toward refugees and migrants held there.” It said staff had witnessed guards beating detainees at one center and received reports of people being shot at in another.

Libya has been a key transit country for migrants from Africa trying to reach Europe, especially after the collapse of order when a NATO-backed uprising toppled and later killed longtime dictator Moammar Gadhafi in 2011. The oil-rich country was long divided between a UN-supported government in the capital, Tripoli, and rival authorities based in the country’s east, each backed by armed groups and foreign governments.

In April 2019, eastern-based commander Khalifa Haftar and his forces, backed by Egypt and the United Arab Emirates, launched an offensive to try to capture Tripoli. Haftar’s 14-month campaign collapsed after Turkey stepped up its military support of the UN-backed government with hundreds of troops and thousands of Syrian mercenaries.

International Relations and CooperationPolitical TransitionSecurity Situation
All
2021-06-24
asaeid
Previous US Embassy/USAID surveys show overwhelming Libyan demand for peace, unity, and elections
Next HoR to hold session next Monday – government to appear before House on Tuesday