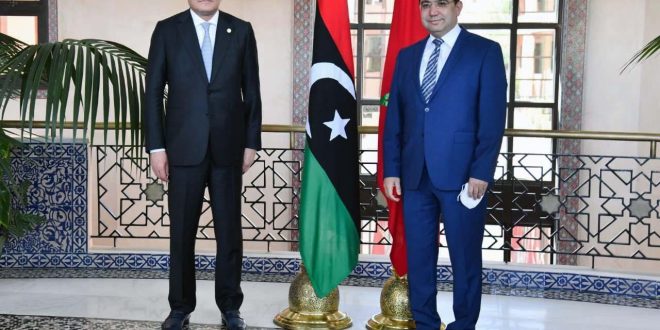 Moroccan Foreign Minister Nasser Burita has described elections in Libya scheduled on Dec. 24 as an important landmark for establishing legitimacy in the country.

Addressing a joint press conference with the Speaker of the Libyan House of Representatives, Akile Saleh last Thursday, he said that the elections should be the most important goal to begin the new era.

Saleh had arrived in the Moroccan capital Rabat for an official visit.

Burita said the integrity and stability of Libya were an utmost concern for Morocco.

He added that the presidential and parliamentary elections are an important stage in the process of establishing legitimacy and for Libyans to choose people and institutions to represent them.

He said his country is in contact with all legitimate institutions in Libya, especially the House of Representatives.

“It is unlikely that solutions that are not based on Libya’s reality and imposed from outside will succeed,” he said.

Akile Saleh, the speaker of the House of Representatives based in Tobruk and an ally of the illegitimate armed forces, said that Morocco plays a central role to solve the Libyan crisis.

He said Morocco was an active member of the international community.

The 75-member Libyan Political Dialogue Forum, led by the UN, representing different political and social segments, decided to hold general elections in the country on Dec. 24.

In addition, the Legal Committee of the Forum for Political Dialogue was established to discuss the constitutional basis of the elections.

The final declaration of the Second Berlin Conference on Libya held on June 23 under the auspices of the UN and Germany, also stated that the elections should be held as stipulated.

The leaders of Germany and Libya met Wednesday in the German capital, according to a statement issued by the Libyan prime minister’s office.

Libyan Prime Minister Abdul Hamid Dbeibeh, who was in Berlin to attend the Second Berlin Conference on Libya, discussed the results of the conference as well as political and economic cooperation with German Chancellor Angela Merkel.

Earlier while addressing a joint press conference with US Secretary of State Antony Blinken, Merkel said “it is very important that we send out a united signal in the direction of Libya that we want to first and foremost see that the people of Libya determine their future.”