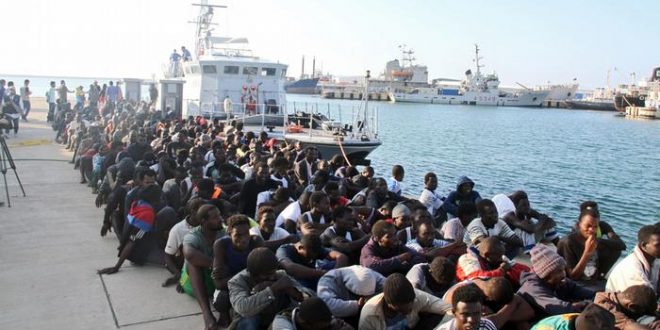 Migrants in distress returned to Libya – on Malta’s request

Some 90 migrants on a boat in distress were reportedly intercepted and returned to Libya over the weekend. The NGO Sea-Watch said Maltese authorities shared the boat’s location with the Libyan coast guard to prevent it from reaching Maltese waters.

On Sunday (June 27) German migrant rescue organization Sea-Watch tweeted that one of its reconnaissance aircrafts had overheard Maltese armed forces sharing the coordinates of a migrant boat with Libya’s coast guard.

A Sea-Watch spokesperson told InfoMigrants that the aircraft then found a dinghy carrying around 90 migrants well within Libya’s search and rescue (SAR) zone.

A sound recording provided by Sea-Watch suggests that a Maltese airplane radioed the Ubari, one of the vessels Libya’s coast guard uses to intercept migrants at sea and return them to Libya. According to Sea-Watch, the Maltese plane was operating in Libyan territorial waters. InfoMigrants was unable to obtain independent verification.

The Sea-Watch spokesperson said it was not the first time it had observed Malta passing on coordinates of migrant boats to Libya’s coast guard so that the boats do not reach Malta’s SAR zone. According to the spokesperson, Sea-Watch crews have even witnessed several cases of Malta giving instructions to Libya’s coast guard to intercept migrant boats within Malta’s SAR zone, despite Malta being responsible for those cases.

In 2019, the Times of Malta revealed that Malta had secretly negotiated a deal with Libya. Under the agreement, the Maltese armed forces coordinate with Libya’s coast guard to intercept migrants headed towards Malta and return them to Libya. Since June 2018 Libya has had its own SAR zone, legally allowing the Maltese and other coast guards to refer any contact from ships not in their own SAR zone to the Libyan authorities.

IOM confirms some of Sea-Watch’s allegations

IOM spokesperson Safa Msehli told InfoMigrants that the IOM “does not have access” nor is it “privy to how operations are organized,” referring to the allegation made by Sea-Watch. However she confirmed that there had been “previous instances of people being returned from Maltese waters to Libya” by Libya’s coast guard and commercial vessels.

Msehli reiterated the stated position of the IOM and the UN refugee agency UNHCR that the basic preconditions to ensure the safety and protection of rescued migrants upon return to Libya are not given.

Libya’s EU-funded and trained coast guard has been the bloc’s preferred partner to prevent migrants from reaching European soil for years. The members of the loosely organized force have been accused of consisting of former militia and cooperating with human traffickers, among other things.
Two boats, different fate

Over the weekend, two other boats were also in distress in the central Mediterranean.

On Sunday, Sea-Watch issued a warning about a boat with dozens of people aboard drifting off Italy’s Lampedusa island. The vessel managed to enter Malta’s search and rescue zone. About 100 people were on the boat without life jackets, according to Sea-Watch.

The NGO said that it called on Malta and Italy to rescue the migrants and that it had used one of its reconnaissance aircrafts to locate the people at sea. Alarm Phone had first tweeted about it Sunday morning.

🔴 #Moonbird spotted the boat in the Maltese SAR zone, 36 nautical miles from Lampedusa. We will follow up with #Seabird in the next hours.

The boat is adrift and the people on board are not wearing life jackets.#Italy and #Malta, you have the duty to rescue them immediately! https://t.co/UKbXqLg4RH
— Sea-Watch International (@seawatch_intl) June 27, 2021

Later on Sunday, distress hotline Alarm Phone reported that the passengers were rescued off Lampedusa, which is located some 160 kilometers away from Malta.

The ~100 people who today were drifting in #Malta SAR have been rescued to #Lampedusa!
We are happy that they will finally have some rest in a place of safety after the dangerous journey which they went through!
Thanks #Moonbird by @seawatch_intl for supporting their search.
— Alarm Phone (@alarm_phone) June 27, 2021

On Saturday (June 26), Alarm Phone also tweeted that a separate boat with some 100 migrants on board was taking in water and its engine had failed. Later in the evening, Alarm Phone said the people in distress “phoned Italy and Malta themselves” but neither country said it was responsible, according to the NGO.

We just spoke to the people in distress on the phone. The weather is getting worse & they fear for their lives. They phoned Italy and Malta themselves, but both refuse responsibility. Meanwhile, the so-called Libyan Coast Guard is unreachable! We call on #Europe: rescue them now!
— Alarm Phone (@alarm_phone) June 26, 2021

On Sunday, Alarm Phone tweeted that the people “were intercepted in a joint operation by Libyan & Tunisian authorities.” While the IOM could not tell InfoMigrants whether a joint operation between Libya and Tunisia had taken place, it did confirm that both countries conducted one or more operations each over the weekend.

On Sunday, Tunisian naval forces picked up 178 migrants from the Mediterranean after their boats broke down on the crossing from Libya to Europe. The bodies of two other migrants were also recovered during three rescue operations off Tunisia’s southern coast. Last Thursday, Tunisian authorities rescued 267 migrants who had tried to reach Europe from neighboring Libya.

Also last week, medical charity Doctors without borders (MSF) said it will suspend its medical activities in two Libyan detention centers to which intercepted migrants are often returned because the levels of violence taking place there are “no longer acceptable.”

According to the IOM, more than 14,700 people have been intercepted and forcibly returned to Libya since the beginning of the year, already exceeding the total number of forced returns for the whole of 2020. Between June 13 and June 19 alone, almost 1,600 people were intercepted and returned.

Thousands of migrants have arrived by boat in Italy this year. According to the latest data from the Italian interior ministry, the number stands at more than 19,300 people, nearly three as many as at the same point in time in the pandemic year 2020.

Hundreds of others have died in the attempted crossing: According to the IOM’s Missing Migrants Project, close to 700 people have died so far this year while trying to reach Europe from northern Africa by crossing the central Mediterranean. This number is also up, from 247 during the same period last year.

International Relations and CooperationSecurity ForcesTrafficking and Migration
All
2021-06-29
asaeid
Previous Turkey will work with Italy for stable peace in Libya, FM says
Next Prime Minister Aldabaiba tells Presidency Council choosing Ministers is within his prerogative