Home / Normal / Water Politics in Libya: A Crisis of Management, not Scarcity 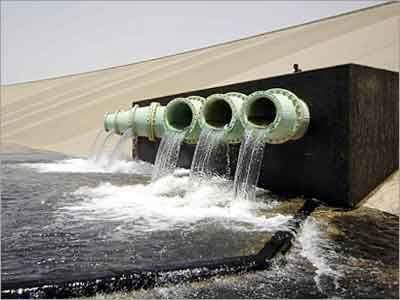 Water Politics in Libya: A Crisis of Management, not Scarcity

Libya today is the 20th most water-stressed country in the world. Its freshwater resources originate primarily from four aquifers – Kufra, Sirt, Morzuk, and Hamada – the last three of which, located within the Nubian Sandstone Aquifer, are close to depletion.

These aquifers are part of the network of the Great Man-Made River Project (GMMRP) that provides over 90% of Libya’s water, and which Qaddhafi anointed the “eighth wonder of the world” and heralded as the ultimate solution for Libya’s water needs. With Qaddhafi gone, Libyans have been trying to separate the truths from the fictions of the GMMRP and the nature and extent of the water crisis.

What we find is that Libya’s water crisis, like water crises around the world, is not one of scarcity but of political governance and mismanagement. Discussions around water use and scarcity in Libya reflect broader, global trends. The notion that the world is entering a water crisis has drastically affected how we perceive water. The management of this “blue gold’’, as denominated in studies and media, has publicized many debates about water use, from its commodification through privatization to its links with food security now and in the future. Fears over water shortages are especially pronounced in the Middle East and North Africa (MENA), one of the most water-scarce regions in the world, containing only 1.4% of the world’s renewable freshwater.

Moreover, MENA countries are extracting more groundwater than is being recharged in the absence of adequate legal frameworks and water regulations – and climate change is expected to further reduce the groundwater replenishment rate while the demand for water increases. According to some experts, the Middle East already ran out of water in the 1970s and now largely depends on “virtual water”, i.e., the commoditization of freshwater at the point of origin and its trade across international borders in the form of food imports.

Yet, as Julie Trottier, puts it: “A water crisis can never be defined simply as a water shortage because nature is never ‘short’ of water. Even the driest desert constitutes an ecosystem…Water is short only when social actors have decided it is so for a variety of reasons.” To understand the water crisis in Libya, we must track how powerful and visible actors have defined the political-economic relationship to water, leading them to promote specific “solutions” over others. This article discusses the defining characteristics and legacies of hydro-politics under Qaddhafi, presents some of the new issues that have emerged since regime change in 2011, and offers some ways forward for water policy in Libya.

The legacy of Qaddhafi’s water policies

Qaddhafi promoted a discourse of Libya as “a country of plenty” – a country full of resource whose wealth put it in a position of power in the MENA region and made other countries dependent on it. This discourse was always in tension with the reality of climatic conditions. Libya is one of the driest countries in the world, with 90% of its land being desert, its population concentrated in the northern coast by necessity, and 85% of all water consumption going to agriculture. The discourse of plenty, unrealistic as it was, served a political purpose: it allowed for the exploitation of Libya’s water resources in ways designed to highlight and preserve Qaddhafi’s power.

Qaddhafi’s signature project, the Great Man-Made River Project (GMMRP), best exemplifies these dynamics. For one, and like the case of other development projects and policies, here too Qaddhafi resorted to religious legitimization to exclude public participation. The project’s famous slogan “turning the desert green like the Jamahiriya flag”, played on “green”, also the colour of Islam. Moreover, from the beginning, water policy was driven by social and institutional engineering that sought to empower certain tribes over others in order to create loyal bastions of the regime and quash the opposition. Before Qaddhafi took power in 1969, during the king’s reign, the Sannusi tribe in the east was the one in power. Qaddhafi decided to change the power structure of the tribal system by empowering less powerful members over the bourgeoisie – all with the aim of building a loyal support base and ensuring unopposed access to the country’s natural resources. He deliberately weakened state institutions as he centralised power through informal networks surrounding the broader family and his tribe. Tribal symbolism was key to Qaddhafi’s system throughout his rule and tribal references filled his speeches. A case in point was his inauguration speech to mark the first phase of the GMMRP in his hometown in Sirt in 1991, where he was surrounded by tribal members. In addition to tribal selective empowerment, the GMMRP was exclusionary in design. It excluded certain regions, such as the Nafusa mountain area, where the Amazigh community resides. This area was deprived of any connecting pipes to the project; its residents were forced to rely for many years on water tanks and fossil aquifers.

Another characteristic of water policy under the former regime was the dilution of water management and control over key infrastructures into multiple institutions. There are five major institutions in Libya responsible for the development, management, and monitoring of water resources and policies: the General Water Authority, the Authorities of Implementation and Management and Water Utilisation of the GMMRP, the General Company of Water Desalination (GCWD), the General Water Supply and Sewerage Company (GWSSC), and the General Environment Authority. Multiple institutions lead to more corruption on an administrative level and randomness in the set of decisions made around water specifically. Two of the four phases of the GMMPR are currently operational and the project is yet to be completed.

The GMMRP also sapped state resources, diverting attention and investment from alternative water policies that would have been beneficial, namely desalination. Although some desalination plants were established as early as the 1960s, the expansion of desalination plants in many coastal cities was slow due to the high dependency and investment that were directed to the completion of the GMMRP from the beginning of construction in the early 1980s. In 2007, the General Company of Water Desalination was established as an offshoot of the Ministry of Electricity, Water and Gas and given responsibility for managing, maintenance, and supervision of desalination plants in the country. The late establishment of the desalination authority, only four years before the beginning of the revolution in 2011, contributed to the fact that desalination has not received its due attention from the responsible authorities since regime change, contributing to making desalination vanish further in the cloud of existing problems.

Simultaneously, while consuming too much of the country’s financial, organizational, and political capital – to the detriment of developing alternative technologies –, the way the GMMRP was imagined made water policy dependent on oil revenue. To transform Libya into the imagined Jamahiriya (the state of the masses), Qaddhafi followed a sequential process: he first nationalized the oil sector, then worked on increasing cultivated lands and agricultural production, such as through Al Kufra agricultural project, and finally turned to water resources to develop the biggest irrigation project, the GMMRP. The sequence the regime followed to develop these projects, as well as the linkages between them, meant that the development of the agriculture and water sectors depended heavily on oil revenues.

A final, critical element of water policy under Qaddhafi was its dependence on foreign companies to complete projects, wherein these companies were paid for their expertise in terms of capacity, workers, and technology without sufficiently including and training Libyans.

Developments since the fall of the Qaddhafi regime have brought water to the political fore in Libya. Long-held grievances over water access have risen to the surface in the form of popular protests – such as in the eastern city of Tobruk, close to the Libyan-Egyptian border, whose residents took to the streets in 2017 to protest long-standing water shortages.

Moreover, the armed conflict has made the water crisis more visible in many ways: the presence of international humanitarian agencies such as UNICEF providing drinking water for regions affected by conflict; the arrival on the scene of power cuts and the ensuing weeks-long water cuts; and water becoming a target in the ongoing political division and fragmentation, such as when water control systems were vandalized by the forces of Khalifa Haftar during his attack on Tripoli.

Despite the political changes at the top, Libya’s water management over the past decade has struggled to shed parts of its inheritance, namely the top-down nature of water governance, the over-exploitation of available resources, the underinvestment in desalination, and the economy’s extreme dependence on oil revenue, which contributes to the notion among citizens that water consumption should be free.

In addition, the political and economic instability in the country since the revolution has created unfamiliar problems of basic management. For example, for all its downsides, the GMMRP wellfields were constantly under the watch of supervisors, and the different stations of the system – electricity, ventilation, tanks – were under military protection around the clock in all regions. The situation now is characterised by a generalized lack of attention by state officials to the importance of water issues in general, their neglect of the challenges facing the GMMRP, and instability in the institutional structure of the water sector – compounded by electrical power cuts and security volatility.

The severity of the situation in many parts of Libya has left people to dig aquifers in their houses, without any supervision or legal permission. Without access to alternative methods such as desalination or sewage water treatment, citizens are likely to continue to dig aquifers.

Priorities for water reform in Libya

The urgency for Libya is to develop water policies that are participatory and allow for management at the local level. During the protests that rocked coastal cities over lack of water, many who mobilized called on improving the continuous shortages by the GMMRP authority through investing in desalination policies and reversing course on the inattention given to this technology with the rise of the GMMRP. The desalination authority established in 2007 must be empowered and provided support, both financial and administrative, to begin the maintenance of the existing facilities in different regions in Libya, as well as study the possibility of extending facilities to other regions far from the coast. The private sector could play a critical role in collaborating to revise and assess the desalination and water treatment facilities. Such an effort is particularly urgent in the areas that were left outside the network of the GMMRP.

A second key need is to invest in raising citizen awareness about water consumption. The fact that such consumption has been free in Libya – as it is subsidized by the state through oil revenue – lowers incentives for moderating consumption. Given that the demand for freshwater is expected to rise to 56% above what is currently available by 2025, there are discussions on the possibility of putting a price on water to increase the awareness of people on the importance of preserving water as an essential component of their social contribution.

Relatedly, pricing water raises the spectre of privatization and the transfer of water control and water management services to private companies. This could be effective in the current situation because it would activate the role of local private companies, which would provide numerous services to cover the state’s failure. Further, it could open opportunities for new entrepreneurs and businesses to develop new methods and tools. To be successful, such a shift would necessarily have to entail close collaboration between the public and the private sector, as the former can no longer deliver the required services of water supply and sanitation. Finally, the unification of institutions that manage water is key on the path towards a coherent vision and strategy for the management of water in Libya.