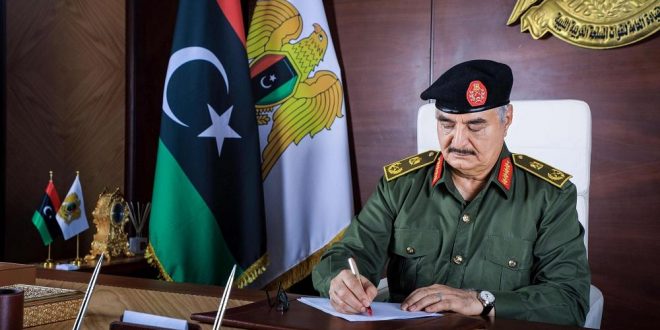 Differences have arisen between delegates at the Libyan Political Dialogue Forum (LPDF) meeting in Geneva over the possibility of Khalifa Haftar standing as a candidate in December’s presidential election in the North African country, Arabi21 has reported.

The differences surfaced immediately after a proposal was submitted which demanded that no conditions be placed on presidential candidates, especially with regard to dual nationality or military rank. This was seen as an attempt to bend the constitutional rule to facilitate Field Marshal Khalifa Haftar’s future candidacy. He holds US citizenship.

The questions being asked are whether the constitutional rule will cause splits within the LPDF, and what the role of Haftar and his team would be in complicating the situation.

According to LPDF member Abdel-Kader Ahwaili, “The differences are ongoing… If no consensus is reached on specific proposals approved by everyone and the UN mission, then the delegates will move to the voting mechanism on decisions and resolve some matters.”

Former Libyan Minister of Planning and Deputy Chairman of the National Labour Party, Isa Tuwaijir, believes that the cause of the crisis and disagreements within the LPDF are the supporters of the former regime, as well as the bloc supporting Haftar. “The two sides are trying to jump on any outputs or results.”

Tuwaijir told Arabi21 that, “Haftar’s team is trying to formulate conditions and articles that guarantee his candidacy, in addition to ensuring that he remains in office until he is sure of his victory, which is a naive and blatant attempt that many members reject because they consider Haftar as ineligible for running due to his US citizenship and military rank.”

Salem Kashlaf of the Constituent Assembly of Libya said that, “The disagreement within the LPDF is a natural consequence given the context, mechanisms and people chosen for the Forum by the UN mission. It focused on choosing the most controversial personalities, viewing them as Libyan representatives while overlooking other elected individuals.”

The dispute over the terms of the presidency, Kashlaf believes, is a major reason for the current crisis in Libya. “It has been linked to certain people with no consideration for the general interest of the country. The ongoing attempt to mould certain conditions for the election of any figure from any party will deepen the crisis at the LPDF and on the street, which raises a question about the credibility of the initiative of the mission and the international community to bring peace and stability to Libya.”

He suggested that the UN mission “deliberately and flagrantly” ignored the outcomes of the constitution-drafting body elected by the people, through which the dispute over the form of the political system, the system of governance and the conditions for assuming state positions in Libya have been resolved. “All of this has been completely overlooked by the international community.”