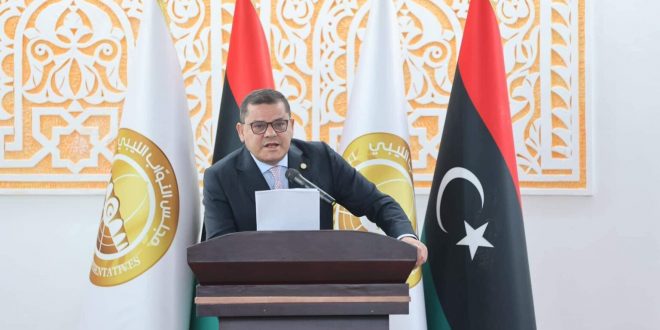 The Libyan Prime Minister Abdul-Hamid Dbeibah said Monday that he was working on selecting two deputies for the Defense Ministry from the members of the 5+5 Joint Military Commission (JMC): Khalifa Haftar’s forces and Libyan Army under the Government of National Unity.

Speaking at a House of Representatives session in Tobruk, Dbeibah said he had consulted with the JMC members and they promised to choose two deputies for the Defense Ministry, saying the Government of National Unity had provided the JMC with all its needs and paid off its financial debts.

“When the budget is approved, the government will help better the living conditions of Libyans and devise a unified salary system by the end of 2021. He denied that his government had spent 30 billion dinars and this excludes the salaries that are the citizens’ rights and cannot be considered a budget for the government or its expenditures.

Dbeibah also talked about Libyan prisoners, saying there are 70 in Italy, some of whom were sentenced to 30 years in prison while at sea and got accused of human trafficking African migrants. He added that Libya and Italy are signing a Prisoner Exchange Agreement to hold those Libyans accountable at home.

He said he will visit south Libya next week, saying fuel crisis in there has been resolved recently as the Interior Ministry assigned aircraft that secured fuel vehicles and added that fuel smuggling is a nationwide problem that can be resolved with the passing of time.

“We’re considering moving the headquarters of National Oil Corporation and Libyan Airlines to Benghazi and we have already ordered moving stock market headquarters to the city. We have provided 600.000 vaccines for Coronavirus and paid part of the financial cost. We are thinking of shutting down borders with Tunisia for two weeks over the spread of Coronavirus in there. Our health system is in dire need for reconstruction. There have been smuggling incidents of medicines imported by the government to the black market.” Dbeibah explained in the HoR session that was suspended to be resumed Tuesday.