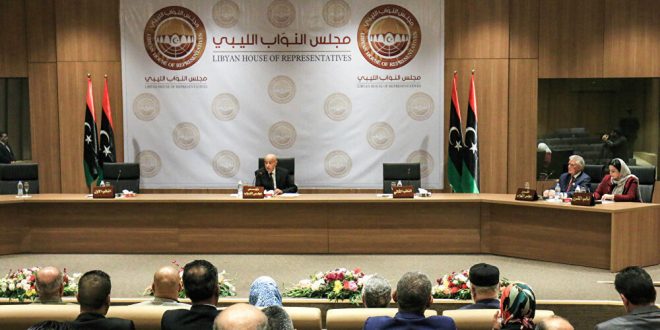 The Libyan parliament has again deferred its session on the adoption of the proposed national budget until tomorrow, Tuesday.

Fawzi Alnweri, the First Vice-President of the House of Representatives, halted the session till tomorrow, citing the Prime Minister’s planned engagements and commitments as the cause, since he would be unable to attend the remainder of the session.

The Libyan House of Representatives had a formal meeting today, chaired by Speaker Aguila Saleh, in the presence of Prime Minister Abdul Hamid Debaiba of the Government of National Unity, to review the draft State Budget Act 2021.

Members of parliament also indicated that the session was convened to address a number of other issues, particularly to debate what the GNU has done since entering office three months ago in March, and to hold the government accountable for its acts since then.

Speaking at the meeting, he stated that the Finance Committee would meet with Finance Minister Khalid Al-Mubarak tomorrow, Tuesday.

At today’s meeting, Prime Minister Debaiba addressed a number of files in response to members’ remarks and interventions on the running of the government, the electricity issue, the selection of the Minister of Defense, and the migration of specific bodies and institutions to Benghazi.

Libya’s Parliament has repeatedly halted the national budget approval session over the last month and a half, bringing the country’s economy to a halt as the Government of National Unity is unable to meet the bulk of its declared targets given the lack of funds.

Members of the public have taken to social media to express their growing dissatisfaction with the Parliament’s continued delays in approving the budget, with some claiming it is done on purpose to prevent the GNU from succeeding and others calling for the budget to be approved quickly so the nation’s public sector can resume normal operations.