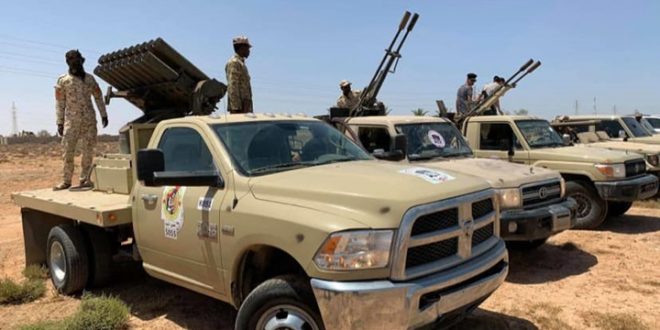 The spokesman for the forces of Khalifa Haftar, Ahmed Al-Mismari, said “Brigade 128” was attacked by four armed vehicles in north Soukna in Jufra at dawn on Thursday.

Al-Mismari said in a statement that a “terrorist gang” pulled out after their forces had shot at them, saying the incident was a provocation that aimed at escalation and hindering the ceasefire.

He also accused “Takfiri and Extermist” people of working to plunge the “Libyan National Army” into clashes to accuse it later of hindering the holding of elections, which are scheduled for December 24.

He reiterated commitment to ceasefire and local and international efforts that aim to achieve peace and security in Libya.

No official or local sources have reported the incident and its damage reports, whether material or human losses.

Jufra, in the meantime, is on tenterhooks as people are constantly tense about the recurrent crimes and armed robberies done by Sudanese mercenaries loyal to Haftar with the protection of “Brigade 128”, which previously blocked Jufra residents’ attempt to storm into the headquarters of mercenaries in the area.

Security ForcesSecurity Situation
Jufra
2021-07-08
asaeid
Previous What is next for Libya after the failure of the Geneva dialogue?
Next Saleh confirms the Parliament’s commitment to the anticipated electoral entitlement