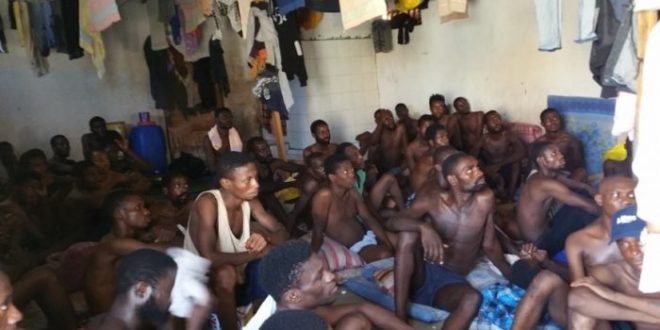 Amnesty slams Libya and Europe over ‘horrific’ abuse of migrants

Amnesty International has condemned the “horrific violations” being committed against migrants returned to Libya with the cooperation of European states after trying to cross the Mediterranean.

The rights group said on Thursday that new evidence had emerged of “harrowing violations, including sexual violence, against men, women and children” intercepted at sea and forcibly returned to detention centres in the North African country.

Amnesty, in a 50-page report (PDF), condemned “the ongoing complicity of European states” for cooperating with the authorities in war-torn Libya.

At the end of 2020, Libya’s Directorate for Combatting Illegal Migration had “legitimised” abuses by taking over two detention centres run by armed groups from where hundreds of refugees and migrants had forcibly disappeared, it said.

One of these facilities is Tripoli’s Shara al-Zawiya centre, the report said.

Pope Francis and United Nations Secretary-General Antonio Guterres have called for the closure of these facilities.

Amnesty cited survivor testimony from one facility of guards subjecting women to sexual violence “in exchange for their release or for essentials such as clean water”, or their freedom.

One said she was heavily beaten for refusing to comply with such a demand, saying: “I told [the guard] no. He used a gun to knock me back. He used a leather soldier’s shoe … to [kick] me from my waist.”

Two young women at the facility attempted suicide as a result of such abuse, Amnesty said.

Others, including boys, described being groped, prodded and violated.

The findings come from interviews with 53 refugees and migrants, aged between 14 and 50, from countries such as Nigeria, Somalia and Syria, who were mostly still in Libya and had been able to flee camps or had access to telephones.

Amnesty also examined documents, photos, and videos from Libyan authorities and the UN.

The rights group urged Europe to “suspend cooperation on migration and border control with Libya”.

‘Rotten to its core’

Italy and the European Union have for years financed, trained and provided aid to coastguards to stop smugglers from taking migrants and refugees in crowded flimsy boats across the Mediterranean to Europe.

Despite being plunged into chaos after the fall of Muammar Gaddafi’s regime in 2011, Libya has become a favoured springboard for migrants seeking a better life in Europe.

Some are fleeing conflict or persecution, while many of the hundreds of thousands are fleeing poverty.

It “sheds new light on the suffering of people intercepted at sea and returned to Libya, where they are immediately funnelled into arbitrary detention and systematically subjected to torture, sexual violence, forced labour and other exploitation with total impunity”, she said.

European nations “have shamefully continued to enable and assist Libyan coastguards in capturing people at sea and forcibly returning them to the hellscape of detention in Libya, despite knowing full well the horrors they will endure”, Eltahawy said.

Eltahawy said Libya’s detention network was “rotten to its core and must be dismantled”.

Despite a truce between Libya’s warring factions since October as part of a UN-backed peace plan following the fall of Gaddafi in 2011, armed groups still hold power on the ground, with some controlling migrant camps.

Since the start of the summer, the number of crossings has increased as migrants take advantage of good weather, but the number of people lost at sea has also risen.

Nearly 900 migrants have died this year trying to reach Europe from North Africa, according to the International Organization for Migration.

The UNHCR said the coastguard brought back more than 13,000 people to Libya between January and June this year, surpassing the number in the whole of 2020.