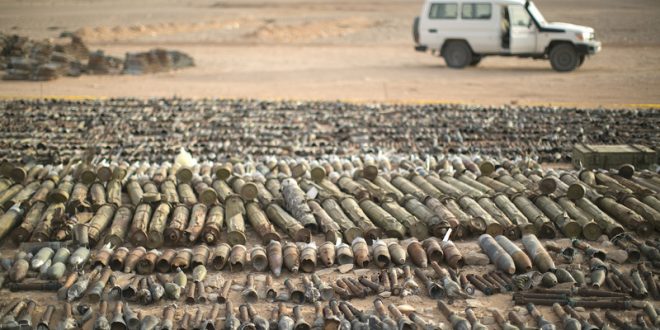 European arms companies are “instrumental” in mass displacement and fuelling the refugee crisis, according to a report by Transnational Institute (TNI).

TNI’s report, Smoking Guns, revealed that weapons sold to countries like Saudi Arabia and the US ended up in the hands of Daesh, and points to specific studies where European arms companies, such as the UK’s BAE Systems, Italy’s Leonardo, and Franco-German Airbus, have directly impacted the mass displacement of people in countries including Syria, Libya, Yemen and Iraq.

Weapons manufactured by Bulgaria, sold to the US and Saudi Arabia were found to be in the hands of Daesh fighters, after the US’ disastrous attempt to arm and train 5,000 opposition fighters to defeat Daesh.

The now defunct “$500 million” programme, was found to be in breach of an ‘end user’ clause in a contract, which would prevent the weapons from being passed on to other entities.

Smoking Guns also revealed the collaboration between Turkish arms companies and Italy’s Leonardo on the manufacture and sale of T-129 ATAK helicopters, which were used extensively in ‘Operation Olive Branch’ in Afrin, displacing around 5,000 people.

The report said that the arms industry was also profiting from the ‘militarisation of borders’ to ‘contain migrants and keep them out’.

“The EU constantly reiterates its commitment to human rights principles and to upholding the rule of law, but in practice many of its policies and practices do the direct opposite – they are instrumental in propping up and maintaining authoritarian regimes, in facilitating armed conflict, and in exacerbating the suffering of entire populations,” the report said.

Niamh Ni Bhriain, the report’s author, said: “No-one should be able to profit from human misery. But the arms industry has created a closed cycle of suffering; selling weapons and technologies that fuel brutal conflicts around the world and then selling more equipment to European governments to force back the refugees these conflicts create.”

“Our report shows how the UK, EU, and their allies claims of defending human rights ring hollow in the face of their private sector’s seemingly unchecked ability to export weapons to human rights abusers.”

“If the governments of powerful countries want to promote real security, they should examine their role in maintaining conflicts that force people to flee to seek safe lives. Europe must act now to break the cycle of suffering.”