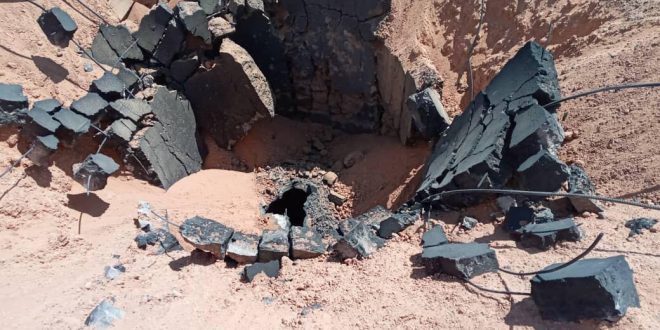 The management of the Man-Made River said Thursday that outlaws had blasted station (353) at the eastern track of Hassawna system, Jafara, thus cutting water supply to Bani Walid, Misrata, Al-Khums, Zliten and other surrounding areas.

Misrata municipality said on Facebook that the water supply line was vandalized and blasted near Al-Shwerif, adding that it had contacted with the water and sewage general company and Man-Made River management to tackle the issue as soon as possible to end water cuts as the river water is the only source for the city.

Misrata municipality urged the water and sewage general company to provide it with water tanks vehicles to respond to the water cut in the city, adding that the end of the problem will be announced as soon as repairing work finishes.

Two days ago, Brigade 444 said it had detained vandals who were trying to target Man-Made River pipes in southern Bani Walid to cut water supplies to Tripoli and other cities, saying the act was sponsored by “foreign hands” to create chaos in west Libya.