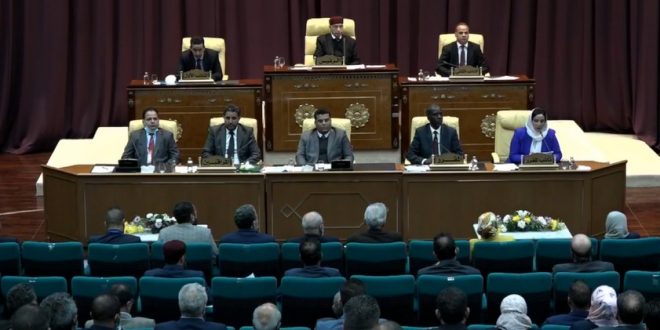 Libya’s troublesome 2021 budget is likely to pass through parliament (the House of Representatives – HoR) as the government has finally caved in and allocated Khalifa Hafter and his Libyan National Army (LNA) an official budget of LD 2.5 billion.

The revelation came yesterday as the HoR concluded its last day of sessions this week. It had been discussing the law to elect the president through a direct popular vote. The HoR failed to vote on the law and postponed debate to a next session.

However, rounding up the sessions at the end of the day, HoR Official Spokesperson, Abdalla Belheeg, revealed that the government had presented its latest draft 2021 budget totalling LD 111 bn.

Belheeg said the draft budget was circulated to members and will be referred to the Budget Committee for comment and study.

It will be very revealing to see if this larger budget is passed by parliament as one of its main objections to passing the budget was that it was too large.

Ostensibly, members said the government has a maximum (now) of just under five months in office before the planned 24 December 2021 elections take place and that the budget it had presented was too large. They had, it will be recalled, reduced the initially presented draft budget of just under LD 100 bn by 20 percent to just over LD 70 bn.

In reality, many members had prevented the passing of the budget for ulterior motives, wishing to extricate concessions from the government such as:

But it must also be said that there is a group of members who honestly believe the budget is indeed too large, and that it will facilitate corruption.

It will be noted that as a result of the salary increases demanded by the HoR, the salaries section of the budget has mushroomed even further (39.5 percent), and with subsidies making up about 20 percent, 60 percent of the budget goes on these two main sections.

The Abd Alhamid Aldabaiba Government of National Unity has stood out though for requesting LD 20 bn (about 18 percent) for projects and development, and despite being asked by parliament to remove the emergency section from the budget – as Libya is no longer at war – he has persisted with it (LD 6 bn).