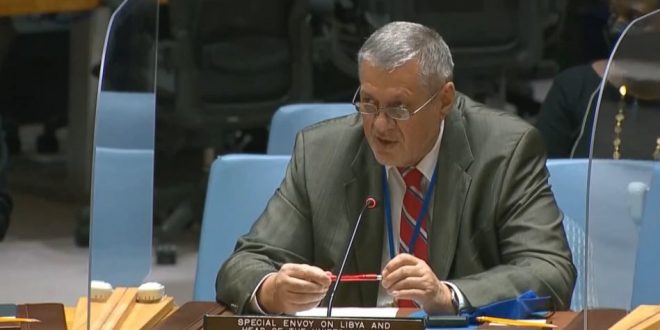 Libya’s planned elections are only 134 days away: UNSMIL head Kubis to LPDF

In his opening remarks to the LPDF virtual meeting yesterday, UNSMIL head reminded the gathered that Libya’s planned 24 December 2021 elections are only 134 days away.

He warned that a protracted stalemate, feeding on mistrust and trading accusations, risks undermining the very essence of the LPDF Roadmap and risks resulting in depriving once again the Libyan people of their right to democratically elect their representatives and restore the long-lost legitimacy of Libyan institutions.

Here are his remarks in full:

Let me start by wishing you all a blessed and happy new Hijri year.

I am pleased to welcome you to this virtual meeting today. As I mentioned in my letter to you, the purpose of this meeting is to listen to the presentations of the four proposals put forward by the Proposal Bridging Committee and to consider the next steps that will take you closer to reaching an agreement on the holding of elections on 24 December.

The Proposal Bridging Committee met four times since it was established during your last in-person meeting in Switzerland. I would like to thank its members for their hard work and dedication over the past weeks.

Unfortunately, the Committee was not able to reach an agreement on a unified proposal. As such, the majority of its members agreed that four proposals should be forwarded to you, to the LPDF.

They also highlighted that these remain living documents open to amendments and adjustments as the consensus-building might require.

The Committee also agreed on a decision-making mechanism for the LPDF to take its final decision on a constitutional basis.

Distinguished members of the LPDF,

Throughout your deliberations, in the Legal Committee, in the different informal groups, you formed, in the Advisory Committee, and in the Proposal Bridging Committee, you have put forward many constructive ideas that can help realize your promise to the Libyan people when you adopted the Roadmap in Tunis.

These ideas contain all the ingredients necessary to reach a constructive compromise if you can mobilize the political will and make the necessary mutual concessions to take your country beyond this state of perennial transition to complete the political process and unification of Libya and its institution under the elected civilian authority.

I call on you to use this session as an opportunity to listen carefully to the proposals of the members of the Committee and to share your ideas and views in a constructive manner exploring how they could be improved and adapted to reach a higher level of consensus within this forum.

I also wish to reiterate that, as I stated in my last letter to you, in considering the proposals and next steps, it is necessary to fully respect the requirement that none undermines your promise to the Libyan people to hold elections within the timeline set by your Roadmap. The draft constitutional basis adopted by the Legal Committee remains the basis for your continuing work

I know that you have many other items that you would like to discuss, all of them are important. But it is my advice to you to focus our discussion today on the agenda items I outlined.

You will have other opportunities to discuss any other matters. I also encourage you to share your ideas on the way forward.

Allow me please to remind you that 24 December is only 134 days away.

A protracted stalemate, feeding on mistrust and trading accusations, risks undermining the very essence of your Roadmap. LPDF’s lack of ability to reach an agreement risks resulting in depriving once again the Libyan people of their right to democratically elect their representatives and restore the long-lost legitimacy of Libyan institutions. It also risks putting into question the LPDF standing, credibility, and relevance.

It is your responsibility and duty to find common ground. The United Nations is here to assist you and to support you as you endeavour to implement the Roadmap. We might eventually come out with some suggestions based on your proposals with the Legal Committee proposal as the main reference document. But neither the UN nor the international community at large can replace your own political will to move past your differences, live up to your responsibilities, and focus on the most important objective which is to develop a constitutional framework for free, fair, transparent, and inclusive elections.

I intend to travel again to Libya very soon for consultations with key political and other stakeholders, following which I plan to convene another meeting of this Forum, most likely a physical one provided you signal readiness to work for a compromise. We cannot afford another inconclusive outcome. We all are looking forward to listening to the presentations by the members of the Proposal Bridging Committee and to your constructive exchanges. I hope that they will remain focused on what is the primary purpose of this meeting. It is to clarify the constitutional basis for holding the inclusive, free, fair, and transparent elections on 24 December of this year.’’