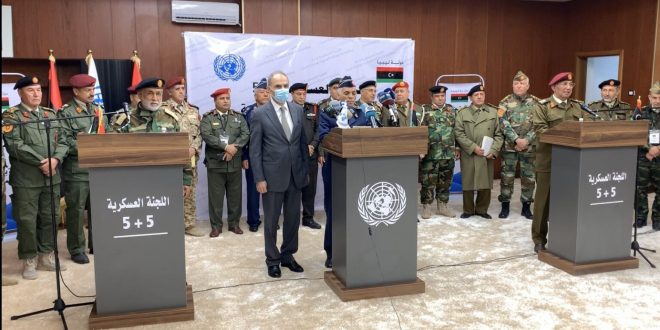 The Libyan 5+5 Joint Military Commission (JMC) has asked the Presidential Council and Government of National Unity to freeze all military agreements and MoUs with all countries, saying it has agreed on emergency measures to remove all foreign forces and mercenaries without exception as soon as possible.

The JMC delegations called for speedy approval of the constitutional basis so Libyans can have their say in December elections, urging as well in their seventh meeting in Sirte on Saturday for appointing a defense minister in the Government of National Unity.

It also said the Libyan Political Dialogue Forum is responsible for any consequences that lead to violating the ceasefire and that its units had stated to open Abu Grein – Jufra road and finish second phase of removing mines on the coastal road, in addition to agreement to exchange prisoners.

Observers said the sixth paragraph of the JMC statement (freezing military agreements) is violation of the Libyan Political Dialogue Forum’s roadmap that says the interim executive authority cannot decide on previous or new state agreements in a way that harms foreign relations for Libya, in addition to intervention in politics by urging for the appointment of a defense minister while it failed to remove mercenaries by March 2021 as agreed upon in the ceasefire agreement that was signed last October.