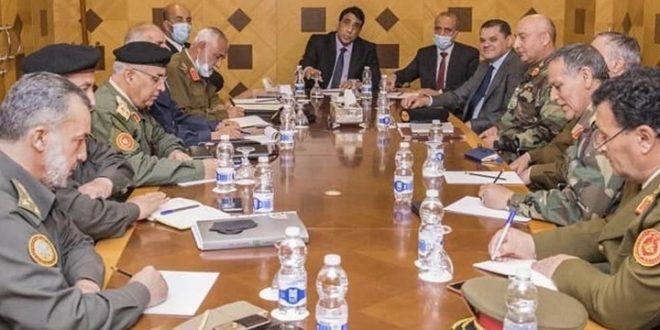 Libya calls on military body not to interfere in political affairs

Libya’s High Council of State yesterday called on the Joint Military Commission known as the 5+5 to “distance itself” from the country’s political affairs and international agreements.

Earlier on Saturday, the commission demanded the Libyan Presidential Council to international agreements and memoranda of understanding concluded with any country.

In response to the commission’s demand, the council stressed in a statement “the need for the commission to abide by its competence, and to distance itself from discussing political affairs or international agreements concluded in accordance with the road map emanating from political dialogue.”

The Council explained that “the security and border agreements concluded by the Government of National Accord were an expression of the Libyan state’s will and the legitimate authority with original jurisdiction.”

The Joint Military Commission which includes five members from the internationally recognised government, and five from the militia of retired General Khalifa Haftar, is concerned with implementing the ceasefire agreement signed on 23 October 2020 in the Swiss city of Geneva.

The agreement provides for the opening of the Misrata-Sirte coastal road, the removal of mines, and the withdrawal of mercenaries and foreign forces from the country.

This year Libya has witnessed a political breakthrough under UN auspices. On 16 March, an elected transitional authority made up of a unity government and a presidential council, assumed their duties to lead the country through a transitional phase to parliamentary and presidential elections slated for 24 December.