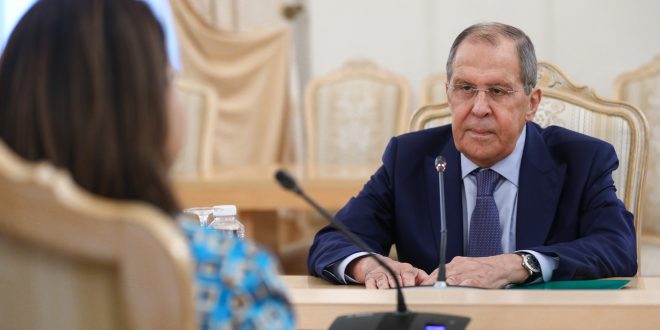 Lavrov: Foreign Troops Withdrawal From Libya Should Be Synchronised and Implemented Step-By-Step

Russian Foreign Minister Sergey Lavrov expressed the belief on Thursday that foreign forces withdrawal from Libya should be synchronised in order not to violate the existing balance of powers in the country.

“The withdrawal of these troops, which must for sure take place, must be organised, as madame minister mentioned, in a step-by-step manner and be synchronised without creating a preponderance on any side at any stage. This is the priority, not attempts to wander from the subject and start discussing whose presence is legitimate and whose is not,” Lavrov said at a press conference.

The minister added that Moscow is ready to take part in consultations on the troop pullout.

“Madame Minister informed us that the Libyan leadership is now forming a consultative mechanism, which will be designed to formulate concrete parameters for the implementation of decisions on the withdrawal of all foreign troops. We will be ready to participate in this work constructively, together with other countries,” Lavrov noted.

Since the overthrow and murder of its longtime leader Muammar Gaddafi in 2011, Libya has been split between two rival administrations, resulting in a decade-long armed conflict. Forces in the country’s west are backed by Turkey and Qatar, while the eastern-based army is supported by Egypt and the United Arab Emirates.

In February, the Geneva-hosted round of intra-Libyan talks led to the formation of an interim Government of National Unity which will be in charge until the December 24 election.