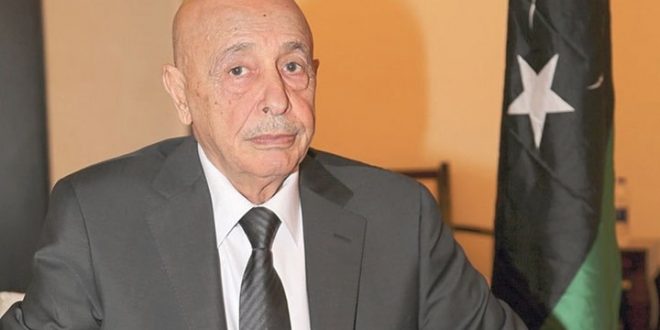 House of Representatives (HoR) head, Aguila Saleh, stressed that the unified Libyan government led by Abd Alhamid Aldabaiba did not unify the country’s institutions and that the unification of these institutions means the participation of all regions in power from ministers to embassies to investment companies, explaining that the government focused management in one place and increased centralization.

Saleh was speaking to Russian media and the fact that the HoR media page went out of its way to republish the interview yesterday indicates that Saleh considers its contents important. Most of Saleh’s media interviews are not republished. Saleh is sending a message.

Consequently, he continued, the constitutional declaration defines the state’s institutions, their powers, their competencies, rights, freedoms, and basic economic, social and political components, and it regulates such matters.

To this end, he explained, the House of Representatives Resolution No. (5) of 2014 AD included in the Constitutional Declaration, states that the Libyan people are the ones who directly elect the head of state, and thus, the method of electing the president is found in the constitutional declaration.

No group is allowed to set a rule and call it constitutional, he insisted, indicating that there are ways to establish constitutions and therefore a return to the constitutional declaration must be made.

The High State Council and LPA

By ”no group” Saleh was referring to the what he considers the lack of cooperation by the High State Council (HSC). Saleh has chosen his own interpretation of the TCD and the Skhirat 2015 Libyan Political Agreement (LPA). The LPS stipulates that the HoR must act in all major political decisions in ”consultation” with the HSC. The HSC objects to the HoR going ahead with organizing elections without its approval or waiting for the ”constitutional basis” to be provided by the still active Libyan Political Dialogue Forum’s (LPDF) Roadmap.

The Libyan constitutional landscape is very complex and with no active permanent constitution and constitutional court to adjudicate, the challenged legitimacy continues. For example, if the TCD is working, why has Libya needed the LPA and LPDF?

If elections are not held, Libya could return to chaos

Saleh stressed that the House of Representatives is the authority exclusively competent to issue legislation, expecting the elections to be held on time, saying, “The Libyan people want elections, and they are the only way out of the Libyan crisis,” noting that if the elections are not held, the country may be exposed to division and return to chaos again.

Regarding Libya’s 2021 budget, Saleh explained that the government presented a budget of 100 billion dinars and then reduced it to 96 billion dinars, and it was reviewed by the HoR. The HoR noted that the Budget’s Chapter on development was not detailed, and the House’s was minded to approve chapter one on salaries and the other chapters, except the chapter on development.

The House then asked the government to detail the development chapter and during that time the government requested from the HoR that it postpones considering the budget because it was in the process of amending. Last week, it presented an amended budget of 111 billion dinars, which was referred to the HoR’s Planning and Finance Committee for study in accordance with the law, and then submit its report on it.

Government can continue spending without the budget

Saleh noted that the government spends 1/12 of the budget and that it does not need the budget, but rather the budget is a law to provide legal cover for these expenses.

Notably, Saleh pointed out that (in his opinion) the amount specified for the armed forces is a small amount that is not commensurate with its tasks and is not appropriate to support and equip it to protect the country and public order.

This could be a revelation as to why the budget has not been approved by parliament so far.

This could be the quid pro quo of Saleh and parliament recognizing the Aldabaiba-led Government of National Unity (GNU).

Foreign armed forces should be withdrawn, Turkey should be punished

Saleh renewed his demand for the withdrawal of foreign forces from Libyan territory, calling on the international community to punish Turkey and oblige it to remove its forces from Libya, and that the justification for its existence is the agreement concluded with the previous government of Faiez Al-Sarraj, who Saleh said did not have the right to conclude treaties. Such treaties must be approved by the HoR, which rejected them and considered them null and void, he added.

Saleh did not mention the alleged Russian forces and Wagner and other mercenaries supporting Khalifa Hafter in the east.

Saleh praised the Russian role in supporting the legitimacy represented in the HoR, saying, “We have old friendly relations with the State of Russia, and its position in the Security Council was clear, bold and supportive of the elected legitimate authority,” adding that what is currently required from Russia is to support the presidential and parliamentary elections.