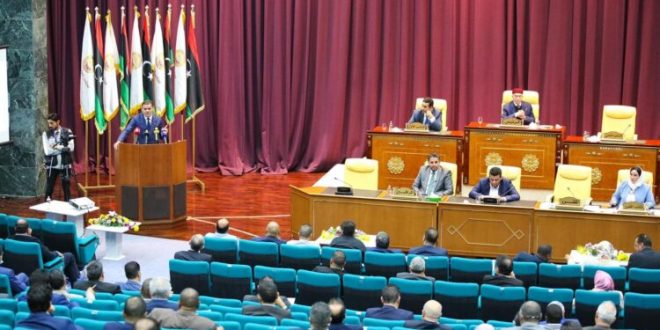 Prime Minister Abd Alhamid Aldabaiba’s government made its apologies to the House of Representatives (HoR) for not being able to attend today’s session to face questions.

In a letter sent to the HoR, which was read out by HoR head Ageela Saleh to members during today’s session, the government said the Prime Minister was abroad (in Jordan) on a visit arranged before it was called in for questioning by the HoR.

Secondly, in the letter the government requested that the HoR send in its precise questions in writing to give it time to prepare answers.

1- Forming a committee of members from all the permanent committees in parliament to accurately prepare questions for the government to prepare for the questioning session next week.

2- Forming a committee of members to prepare a proposal for electoral districts and the distribution of seats to be presented to parliament.

3- Forming a committee of members to communicate with the Ministry of Finance to find out the money spent by the government and how it was spent, and to request information in this regard from the Administrative Control Authority and Audit Bureau before the next session.

The session was adjourned until tomorrow.

It will be recalled that on 23 August the HoR had called the government in for questioning today. This followed twenty-eight eastern-based members calling on 25 August for a vote of no-confidence in the government.

This came after the government had present a third draft of the 2021 budget on 16 August. The draft budget was LD 111.5 bn – which many members considered too large for a government expected to leave office on 24 December 2021.

Legislation
All
2021-08-30
asaeid
Previous LCW call for an end to kidnapping and enforced disappearance in eastern Libya
Next As the 2021 budget approval continues to be delayed: AGOCO about to shut down activity due to lack of funds