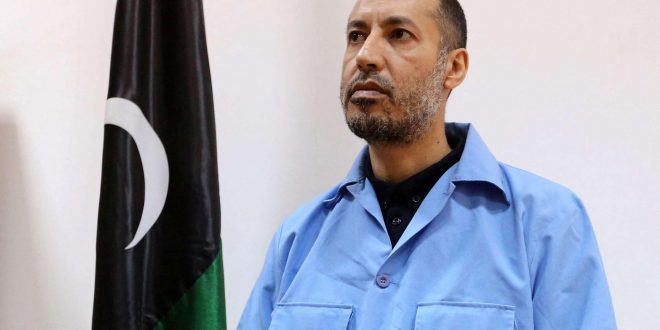 As diplomatic efforts continue to salvage the Libyan elections scheduled for December, the authorities in Tripoli this week announced the release of Saadi Gaddafi, son of former Libyan leader Muammar Gaddafi, Ahmed Ramadan, former Libyan dictator’s personal secretary and Naji Harif Gaddafi, a senior security official under Gaddafi, along with a number of other affiliates of the former regime.

The authorities believe this step will help to pave the way to comprehensive reconciliation in the war-torn country.

The Libyan Government of National Unity (GNU) stated that Saadi Gaddafi, held in prison in Tripoli since March 2014, had been released to his family “in accordance with legal procedures” and “in implementation of a judicial ruling two years after the ruling for his release in cooperation with the Office of the Public Prosecutor and the Agency for Counterterrorism and Organised Crime.”

The GNU statement, posted on its Facebook page, reaffirmed its “commitment to fulfilling its pledge to release all prisoners whose legal circumstances so determine without exception,” adding the hope that “these efforts will promote the comprehensive national reconciliation course in Libya, the foundation of which is the enforcement of and respect for the law.”

The Gaddafi Tribal Council posted an announcement on its Facebook page on Sunday evening confirming Saadi’s and Harif’s release without mentioning details.

The Libyan Presidency Council in a statement released on Monday morning also announced the release of “a number of political prisoners who had served their sentences or who had not been found guilty by the courts.”

The release of Gaddafi’s personal secretary Ahmed Ramadan was a gesture to promote comprehensive national reconciliation in Libya, the council said, pledging to continue to work to coordinate the release of all prisoners who had not received prison sentences.

“This process is in the framework of the [Presidency Council’s] hands-on follow-up on the political prisoners issue with all the concerned parties,” the statement said. The measure was “an affirmation of the values of justice and the principles of human rights in building the new Libya.”

The statement added that Minister of Justice Halima Abdel-Rahman had asked to accelerate the release of all persons forcibly imprisoned without charge and to bring all those facing charges to trial as soon as possible.

Saadi Gaddafi, acquitted on the charge of killing former football player Bishr Al-Rayani, left Tripoli on a private jet bound for Istanbul from where he will travel to Cairo, according to Libyan media. Ramadan was taken by military helicopter from Tripoli to his hometown in Al-Asaba in western Libya where he was greeted by members of his family.

The prisoner release in Tripoli occurred soon after eight detainees were released in Sirte under the supervision of the 5+5 Joint Military Commission (JMC) created under the UN-sponsored Berlin Process for Libya.

The JMC is currently overseeing a prisoner exchange between the belligerents in the Libyan conflict in accordance with the ceasefire agreement signed in Geneva last October. Mohamed Al-Rajoubi, the head of the Misrata Council of Dignitaries and Elders, said that he had received three detainees who originated from Misrata and five from Gharyan.

The release of Gaddafi’s son and several Gaddafi officials was celebrated by supporters of the old regime and members of the Gaddafi tribe, who have indicated they are looking forward to closing that chapter.

The development is part of a larger trend among various segments of Libyan society to build new alliances. This applies in particular to Tripoli, where several militia groups are competing for control over the capital and other parts of western Libya.

In contrast to the GNU’s statement explaining that the releases were meant to pave the way for national reconciliation, some observers believe the step was part of the prime minister’s efforts to strengthen his alliance with old regime affiliates who played a role in helping him to power through the Libyan Political Dialogue Forum (LPDF) that created the new executive in February.

Mohamed Ibrahim Al-Darat, director of the Presidency Council’s Policies Support Bureau, told Al-Ahram Weekly that “the recent releases of former regime officials was a response to social and tribal pressures more than it was part of a comprehensive process of national reconciliation.”

During the past three years, former regime officials had taken advantage of mechanisms to get out of prison and these were implemented with the aim of winning political support.

Al-Darat said the release of Saadi Gaddafi and other former regime officials was best understood in the context of the current political interplay in western Libya in the lead up to the elections. The people who had helped to secure their release “believe they can benefit from the social and tribal forces affiliated with the former regime and obtain their support in the forthcoming elections,” he said.

GNU Prime Minister Abdel-Hamid Al-Dabeiba appears to have more immediate concerns than the elections. Two members of his cabinet are at loggerheads in a dispute over their areas of jurisdiction, and some members of the House of Representatives have initiated a campaign to withdraw confidence from his government.

Aoun dismissed Sanaalla and filed a complaint against him, and Dabeiba stepped in as a way of mending fences. On Monday, Aoun announced that he was sticking to his demand for a reshuffle of the NOC board of directors, which has long been headed by Sanaalla.

In order for the Libyan elections to proceed as planned in December, the LPDF needs to approve their constitutional basis. Some LPDF members called for a meeting in Tripoli this month to complete deliberations over the text of this, and UN Special Envoy for Libya Jan Kubiš has been shuttling back and forth between various Libyan parties in order to encourage progress towards this end.

In the last meeting two weeks ago, he said he would not call for an LPDF plenary unless he could be sure that members would discuss the constitutional basis without getting sidetracked into other issues. He exhorted them to fulfill their responsibilities to the Libyan people, who have their hearts set on presidential and legislative elections on 24 December, he said.