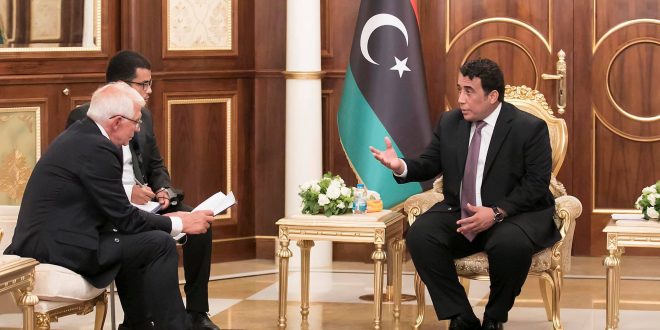 Menfi to Borrell: Ready to issue presidential order for elections

The Head of the Libyan Presidential Council (PC), Mohammed Menfi, told the visiting High Representative of the European Union (EU) for Foreign Affairs and Security Policy, Josep Borrell, Wednesday that the PC is with holding elections in all possible ways, including issuing a presidential order that meets the aspirations of the Libyan people.

In a meeting between Menfi and Borrell in Tripoli, they discussed joint relations, especially cooperation with the EU in combating illegal immigration, established national reconciliation in Libya, holding elections and prevailing security.

Borrell hailed the efforts of the Presidential Council, especially in unifying state institutions, consolidating the ceasefire and national reconciliation, saying the EU is ready to support Libya in holding elections and achieving national reconciliation, expressing as well appreciation for the PC’s steps to respect human rights which could increase credibility of the elections.

Meanwhile, in a joint press conference with the Libyan Foreign Minister Najla Al-Mangoush in Tripoli on Wednesday, Borrell said the EU is delighted to see Libya achieving progress and reminded that December elections are approaching, adding that the EU is happy to support Libyan institutions, increase cooperation; especially in the Mediterranean as it plays a pivotal role in monitoring weapons flow and smuggling operations.