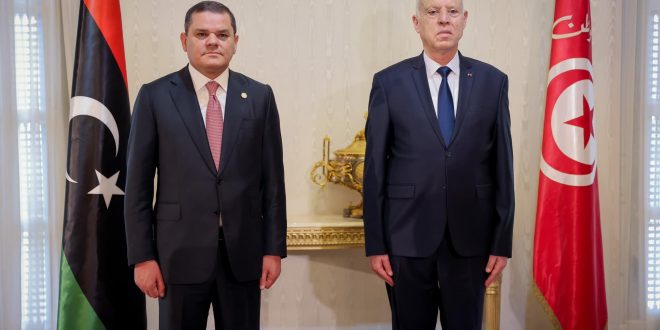 The Libyan Prime Minister Abdul-Hamid Dbeibah and Tunisian President Kais Saied have agreed to coordinate through each country’s Health and Interior Ministries to establish a protocol for the reopening of borders so travelers and other movements can return via flights and land border crossings soon.

They discussed the latest developments in both countries and ways to increase cooperation in security and economy.

The visit by the Prime Minister came after heated disagreements on bilateral relations between Tunis and Tripoli following media accusations from both sides and a Tunisian Interior Ministry letter saying there were terrorists at Al-Wattia air in Libya.

Dbeibah said at the time that neighboring countries including Tunisia were exporting thousands terrorists, but he said on Wednesday at the House of Representatives that he didn’t accuse Tunisia of exporting terrorism and he would say so on his visit to Tunis.