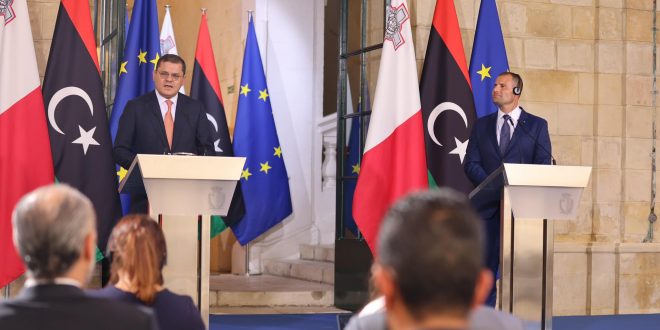 Following Friday’s official visit to Malta by Libyan Prime Minister Abd Alhamid Aldabaiba and his meeting with Maltese counterpart Robert Abela, the Libyan government revealed that the two countries had agreed on several measures, the most important of which were:

– Increasing the volume of investments between the two countries and issuing several procedures that contribute to facilitating residency, visas and various banking procedures by Malta.

A meeting was held between the Ministers of Interior, Justice and Defence to discuss a number of important files regarding the Libyan community and to address and limit some files related to smuggling.

– Agreement to convene the Libyan-Maltese Joint High Committee and work to activate it.

– Benefiting from the Libyan Capacity Building Centre located in Malta to conduct specialized training in various fields in cooperation with Maltese institutions.

– Joint cooperation in the field of providing vaccines against the emerging corona virus, according to what is available in the two countries.

– Increasing cooperation and communication between Libyan and Maltese institutions due to the importance of this for the two countries.

Border ManagementInternational Relations and Cooperation
All
2021-09-13
asaeid
Previous Haftar to fly to the US with family, pretending it’s a Libyan official visit
Next Libya arrests 2 suspected traffickers, returns 53 to Egypt