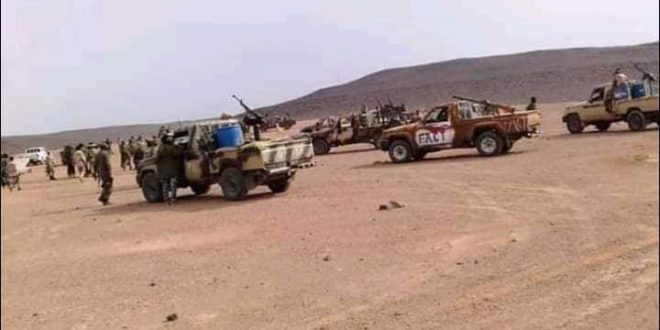 The LAAF said ‘‘the special task force of Major General Tariq bin Ziyad (TBZ) is carrying out extensive military operations targeting mercenaries and elements of the Chadian opposition stationed on Libyan lands, where their positions were targeted in the Tarbu area on the southern border.

The division’s units managed, during their clash with these armed groups, to destroy a number of their armoured vehicles and to eliminate those who were inside, and the remnants of these groups continue to be chased in the border areas.

Meanwhile, FACT (The Front pour Alternation et la Concorde au Tchad / Front for Change and Concord in Chad) said TBZ affiliated to one Hafter’s sons and supported by Sudanese forces and ‘‘supervised by Special Forces of the French Army based in Libya’’ attacked FACT ‘‘positions on the Libyan border’’. It specified that the attacking forces included ‘‘three French officers assigned to Mortar fire’’.

FACT said ‘‘the objective of this attack entrusted to the French special forces is to capture and / or kill the President of the FACT executive Burcu’’. It maintained that ‘‘President Mahadi is well and himself leads the operations of the fighting this morning and those of the sweeps still in progress.’’

It claimed that ‘‘The assault of the forces of evil has failed ‘’ and ‘‘The enemy came by a narrow path and left by seven different paths, in total rout.’’

FACT said that although the search operations are continuing, they were able to provide a provisional detailed report citing 11 dead enemy forces, ten wounded abandoned on the battlefield, several vehicles and war material destroyed and a recovered all terrain armoured fighting vehicle.

They also admitted to four deaths in their ranks and the loss of an armoured car.

FACT added: ‘‘As you can see, France not only violates and despises our sovereignty by imposing and supporting the CMT (the transitional military council of Chad) but also violates the principle of the ceasefire announced last spring. The Front for Alternation and Concord in Chad calls on the international community to witness.’’