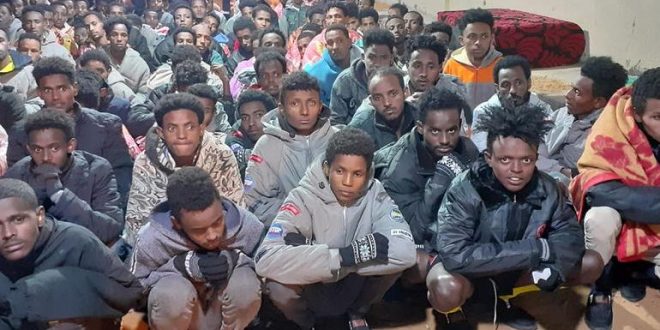 A UN migration agency official expressed concerns Friday over the disappearance of thousands of Europe-bound migrants who were intercepted and returned to Libya as more and more desperate people risk their lives trying to cross the Mediterranean Sea to Europe.

According to Safa Msehli, a spokeswoman for the International Organization for Migration, the Libyan coast guard, which receives funds from the European Union, intercepted more than 24,000 Europe-bound migrants in the Mediterranean so far this year, including over 800 this week alone.

However, only 6,000 have been accounted for in official detention centres in the North African country, she said. The fate and whereabouts of thousands of other migrants remain unknown, she said.

“We fear that many are ending up in the hands of criminal groups and traffickers, while others are being extorted for release,” Msehli added.

A spokesman for Libya’s Interior Ministry, which oversees the detention centres, did not immediately respond to a request by the Associated Press for comment.

Libya has for years been a hub for African and Middle Eastern migrants fleeing war and poverty in their countries and hoping for a better life in Europe. The oil-rich country plunged into chaos following a NATO-backed uprising that toppled and killed longtime autocrat Muammar Gaddafi in 2011.

Traffickers have exploited the chaos and often pack desperate families into ill-equipped rubber or wooden boats that stall and founder along the perilous Central Mediterranean route. Thousands have drowned along the way. They have been implicated in widespread abuses of migrants, including torture and abduction for ransom.

The number of migrants intercepted and returned to Libya so far this year is more than double the number for 2020, when more than 11,890 were brought back to shore.

Those returned to shore have been taken to government-run detention centres, where they are often abused and extorted for ransom under the very nose of UN officials. They are often held in miserable conditions. Libya’s government receives millions in European aid money paid to slow the tide of migrants crossing the Mediterranean.

Guards have been accused of sexually assaulting female migrants in at least one government-run detention centre. Many migrants also simply disappear from the detention centres, sold to traffickers or to other centers, the Associated Press reported in 2019.