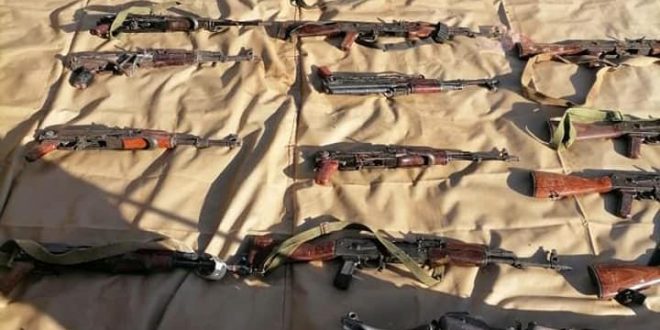 A shipment of weapons from Libya was seized by Sudanese forces on Saturday, the country’s Rapid Support Forces (RSF) paramilitary group said in a statement.

RSF members “deployed on the border strip between Sudan, Egypt, and Libya, managed to seize a shipment of weapons, ammunition, and explosives coming from the State of Libya,” the statement was quoted by Anadolu as saying.

It added that four Libyans were arrested in the sting.

The paramilitary group said its forces clashed with the smugglers before seizing “two GMC cars carrying 36 Kalashnikov rifles and two boxes of grenades in addition to the DShK cannon, an RPG-7 launcher” and various ammunitions.

Libya’s southern border with Sudan, Chad, and Niger is home to transit routes used by smugglers, arms dealers, and militants.

The area is controlled by various armed tribes such as the Tabu and Tuareg who receive money, goods, and fuel in exchange for allowing smugglers a safe passage.