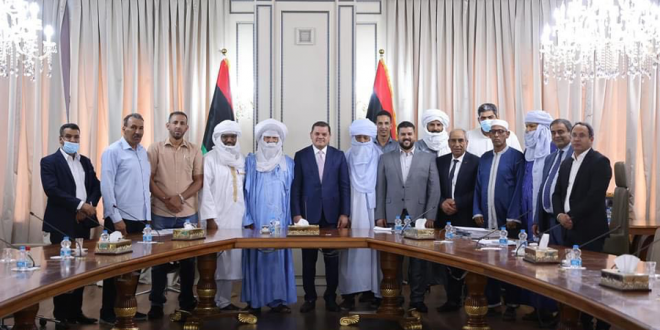 The Prime Minister of the Government of National Unity (GNU), Abdel Hamid Dbeibah, has stressed the necessity to address the file of Libyan citizenship in the southern region of Libya, according to the standards of legal foundations.

Dbeibah added, in a meeting with the head of the Tuareg Social Council of Libya on the challenges facing the residents of Ubari, that they will not permit the citizenship file to continue in the present manner, regardless of reasons.

He pointed out that the development file launched by the GNU includes the city of Ubari where the Ubari-Ghat road is expected to be implemented, along with support for the municipalities of Ubari, Al-Gharifa and Bint Beya, through the Ministry of Local Government.