Home / Normal / After the withdrawal of confidence, Dbeibeh calls on the Libyans to get out and express their opinions 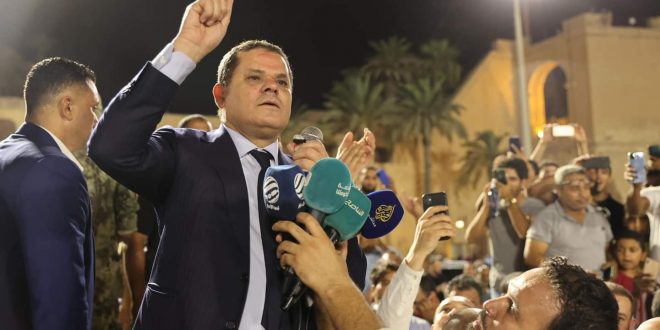 After the withdrawal of confidence, Dbeibeh calls on the Libyans to get out and express their opinions

On Tuesday, the prime minister of the National Unity Government in Libya, Abdel Hamid Dbeibeh, called on Libyans to go out to the streets and express their opinions.

In his first speech after the House of Representatives withdrew confidence in his government on Tuesday and, during a speech he delivered in front of a crowd from Zawiya district—which had attended the five-side league final there—Dbeibeh said, “I am a servant of the people from all sects. The people make decisions and own legitimacy and right. Go out and express your opinions and your right to this life, without fear. Do not fear, but Allah. And your right is maintained, God willing.”

The House of Representatives voted, at Thursday’s session, to withdraw confidence from the National Unity Government, with a majority of 89 deputies out of 113 who attended the session, but which was rejected by the Supreme Council of State, the mayors of 59 municipalities and many political figures and bloggers, as the voting quorum conflicts with the provisions of the Constitutional Declaration, the Political Agreement and the Road Map.

The government will continue as a caretaker body until another decision is issued by the House of Representatives, or the date of the presidential and parliamentary elections scheduled for 24 December is reached, according to a previous statement made on Tuesday by the media advisor to the Speaker of Parliament, Fathi Al-Marimi.

For its part, the United Nations Support Mission in Libya (UNSMIL), expressed its concern over withdrawing confidence from the Government of National Unity, according to a statement issued by the mission.

“The mission confirms that the current national unity government will remain the legitimate government until it is replaced by another government through a regular post-election process,” the statement said. The government’s primary focus remains to move the country towards parliamentary and presidential elections on 24 December 2021, and to provide necessary services to the people.

The statement continued, “As the Special Envoy and Head of the United Nations Support Mission in Libya, Jan Kubis, emphasised—the mission had expected that the efforts of the House of Representatives would focus on finalising the parliamentary elections law. And that the council’s leadership works to strengthen its efforts towards building a broad consensus on the legislative framework for elections, which is under way.”

The statement added: “The mission urges the House of Representatives to complete work on the Parliamentary Elections Law within the next week, at the latest.” The mission reminds the parties to abide by the legal and constitutional framework governing the Libyan political process.

The statement indicated that “the United Nations Support Mission in Libya calls on the House of Representatives and all relevant institutions and political actors to focus on completing the preparation of the constitutional and legislative framework for the 24 December elections, and to refrain from any action that could undermine the electoral process and the country’s unity, security and stability.”