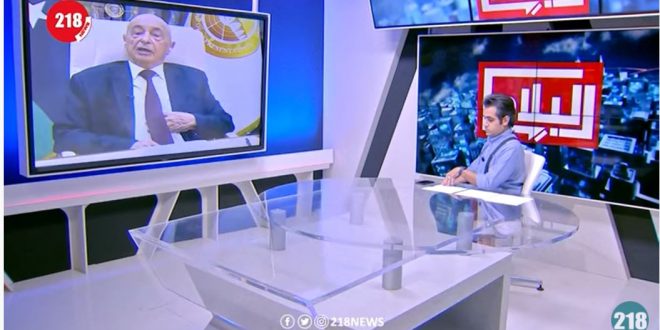 The Tripoli demonstration was called by Prime Minister Aldabiaba in protest at the HoR’s vote-of-no-confidence in his government last Tuesday. His government will continue in office as a caretaker government. In his Friday speech Aldabaiba laid into the HoR casting them as the obstructionist bad boys.

On the reasons for the no-confidence vote, Speaker Saleh said the HoR felt the interim government was not performing well and had not kept to its brief. He said the Aldabaiba government came to power with a finite agenda approved by parliament. It did not have the right to spend billions on long term contracts which could be not in interest of the country. It should have concentrated on providing services, salaries, reconciliation, and elections.

Saleh said the HoR granted the government confidence, and it can withdraw it. The international community understands and accepts this, he assured.

On the correctness of the no-confidence vote procedure

Saleh was asked about the correctness of the HoR no-confidence vote as numerous HoR members had questioned it. Saleh assured that the voting process was correct.

On not consulting HSC on confidence vote

On failing to consult the High State Council (HSC) on the no-confidence vote, Saleh insisted that the HSC has not been enshrined in the in 2011 Temporary Constitutional Declaration (TCD) nor the 2015 Skhirat Libyan Political Agreement (LPA) and therefore the HoR is not obliged to consult it. The HoR cannot sit hands tied while the country is in chaos, he added.

On the Tripoli demonstrations against no-confidence-vote, called for by Aldabaiba, Saleh said the public have the right to demonstrate peacefully and that he did not see it as a problem.

Timing of no-confidence vote is wrong?

Saleh was asked if the timing of the no-confidence vote was wrong given that, in reality, it will not affect the government in practice as it would probably carry on as normal in its spending given it is aligned with the Central Bank of Libya.

Saleh agreed that the government should continue discharging its duties as normal – within the scope agreed upon its endorsement.

He insisted that he and the HoR were not against supporting youth with grants and in fact, he called on the government to do more for them as he said they are Libya’s future. He nevertheless hoped the government accepted and respected the limitations of being a caretaker government.

What if the government ignores the no-confidence vote?

Asked specifically what would happen if the Aldabaiba government chose the ‘‘fait accompli’’ course of action and totally ignored the limitations on its actions of the vote-of-confidence and chose to continue spending as it likes – like the Faiez Serraj government did for 6 years spending without an approved budget.

Saleh said that that kind of spending could constitute a criminal offence and hoped the unified Aldabaiba government, still recognized by the HoR, would not choose that course. He reiterated that the caretaker label only prevents it from signing large, long-term contracts – otherwise all the normal everyday spending continues on the one-twelfth formula normally.

Could HoR reverse the vote-of-no-confidence?

Asked if the HoR could possibly reverse the no-confidence vote, Saleh said it is up to the HoR members.

Saleh was asked to comment about the Fatwa (religious edict) prescribed by the Dar Al-Ifta (the highest Libyan religious authority) calling for the downfall of the HoR.

Saleh said that Mufti Sadeg Al-Ghariani (the head of the Dar Al-Ifta), who had been like CBL Governor El-Kaber removed from office, was against elections, civil society, and the peaceful transfer of power. He is an opponent of the HoR – as he has been from the beginning. The HoR does not recognize him as Mufti, he reiterated.

HoR to blame for instability?

Asked if he accepted that the HoR was partially to blame for the current political instability by failing to approve the government’s 2021 budget, Saleh said the 2021 budget was not passed because the government had spent too much in such a short term. It was also undecided about the size of its budget as it kept withdrawing/amending it.

He confirmed that the Central Bank of Libya in Tripoli was cooperating with the government and that it has spent as it wanted. It has spent too much money which was unapproved by HoR, he explained.

Saleh was asked to respond to public criticism that the HoR was inefficient. The public felt that the HoR was responsible for delays in the budget and legislation generally in its lifetime. For example, despite all the urgency Libya finds itself in, it still only holds sessions on Mondays and Tuesdays and rarely Wednesdays. In view of Libya’s political crisis, the TV presenter asked him why wasn’t parliament in permanent session?

Saleh said the HoR’s internal regulation stipulates that the HoR has two sessions, on Mondays and Tuesdays. He said the rest of the days were for committees who needed the time to work properly. He said some members were outside the country.

But there were also those (the boycotters) who fail to turn up by purpose to prevent a quorum being formed. He urged all members to attend sessions.

On the sacked Central Bank of Libya Governor El-Kaber

With reference to Saleh’s comment that the Central Bank of Libya’s Governor Sadek El-Kaber was ‘‘cooperating with the governments’’ in Tripoli, Saleh was asked how come the HoR was unable to remove him? Why has he remained 11 years in his post?

Saleh said the HoR had removed him in 2014 but that the international community did not listen and insisted he stayed. The Tripoli governments also insisted he stayed because he cooperates with them. We tried to remove him, he bemoaned. We agreed on new sovereign positions with the HSC, but for 3 months they would not reply. El-Kaber broke many laws and we have reported him to the Attorney General, he revealed.

A delay in approving the parliamentary election law?

Saleh was asked why was there a delay by the HoR in approving the parliamentary election laws? Saleh reminded of the concept that all existing laws stand until annulled or amended. He said the parliamentary election law (10/2014) used in the 2014 election exists. He said in the next session it might be amended and should be passed. He said the Joint Committees will consult with the HSC. However, if no new law is passed, the High National Elections Commission (HNEC) must use the current law if no amendment is agreed with the HSC.

Will there be elections?

Asked if he felt there will be elections held, Saleh said he was confident there would be. He said there is no way out for the country except through the holding of elections on time. Otherwise, the country will be in trouble, he warned.

Will the current HoR really give up power?

Saleh not revealing if he will stand for elections

Asked if he would be standing in the elections, Saleh said he could not reply until the elections are announced officially.