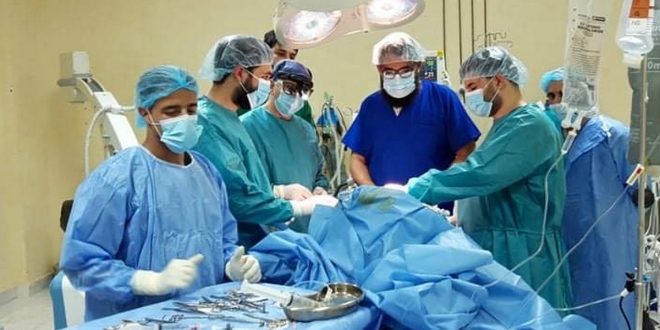 When I suffered from a foot injury as a young man in Libya, prior to Gaddafi’s coup d’état in September 1969, I received prompt and efficient care at one of Benghazi’s social security polyclinics. Libyan citizens had access to both private and public medical coverage, with equipped hospitals staffed by the best foreign doctors and nurses. King Idris’s government had even begun investing in its own young physicians, granting them scholarships to the United States and luring them back with economic incentives.

I was one of those aspiring students to be sent to Texas; but I would be diverted to Egypt when Gaddafi came to power, placed instead at one of Gamal Abdel Nasser’s Arab Nationalist medical schools. Thereafter, I would escape to North America to complete my medical studies at McGill University and University of Toronto and qualify as a leading Cardiothoracic surgeon.

Fast forward to my recent trips to Derna, a city in the eastern region of Cyrenaica, that was bombarded and razed to the ground in 2017 during battles between the Libyan National Army and the Derna Protection Forces (DPF). There had been one hospital to cater for the locals, though unsuitable for patient care in my view, having been neglected by the changing authorities over 50 years. Now, despite all the promised government funding and international support, I found its condition worsening, so that the only medical facility for a population of 200,000 is deserted, revealing a dire level of negligence by a centralised government 1,000 miles away in the capital Tripoli.

Between that promising historical snapshot and today’s dismal conditions, there was the harm wrought by the 42-year dictatorship era, when all health and educational institutions had been nationalised, replacing apt practitioners with revolutionary mobs. I had left long before the damage had become so entrenched; with some time being active in the political opposition which had led to a sentence to prison in absentia.

When in the early 2000s Libya had somewhat returned to the international fold, I did get an invitation by one of Gaddafi’s sons to return to the country with the ambiguous brief of ‘General Advisor on Health Affairs’. Tasked to review the sector, I received royal treatment with publicity to portray the regime’s new espousal of modern governance. I remember hopping in and out of cars and airplanes, going to clinics and hospitals all the way from Al Jmeil (close to the western border with Tunisia) to Tubrok (port city most to the east). What I witnessed shook me to the core.

There were dozens of hospitals sitting idle, with white elephants worth billions of dollars lying unused; the steel doors, windows and equipment rusted by the brutal humidity. On paper these were staffed but none of the employees had ever set foot in them! A sham, this front had been used to embezzle billions of dollars from the rentier oil economy with consent from the top; and, thus, it had deprived thousands of Libyans of suitable care and forced them to travel, daily sometimes, to health facilities in nearby countries, like Tunisia and Egypt.

Since the February 2011 revolution and following decade of turmoil, Libya’s healthcare system is bleeding and struggling for life. Although Gaddafi was removed, this did not magically result in improvement for the country’s vital organs, nor did it miraculously transform people’s fraudulent and lazy habits. With the changing governments, East versus West divisions, shifting militia ownership of land and regions, as well as the deterioration of security, it makes for a profound case puzzling all expertise.

After several medical missions to Libya and studying the precarious system, I assembled a group of consultants with the Libyan Expertise Forum for Peace & Development (LEFPD), to reach a consensus: that Libya’s situation calls for a bottom-up re-engineering strategy. It is no longer possible for a model of central governance, first designed in the late 1940s during the British Mandate, to continue to provide policies and application. Decentralisation is the way forward, with the creation of a hybrid administrative system and a local government coalition, based on three to six primary geographical zones.

To transcend the political and security differences and effectively triage and prioritise healthcare initiatives, we have called for a National Health Council. Although first ignored by the UNSMIL, international donors and consecutive adversary governments, we still propose it. With the pressure on the current care-giver government of Prime Minister Abdul Hamid Dbeibah to deal with public services – he was publicly urged to do so by US Secretary of State Antony Blinken – the time to act is now and not later.

Looking ahead, the LEFPD will convene a conference in November to bring Libyan and international healthcare experts, to lay out ideas and propose concrete steps to the government and other stakeholders, in the hope of jumpstarting the Libyan healthcare reform efforts and resuscitating them.