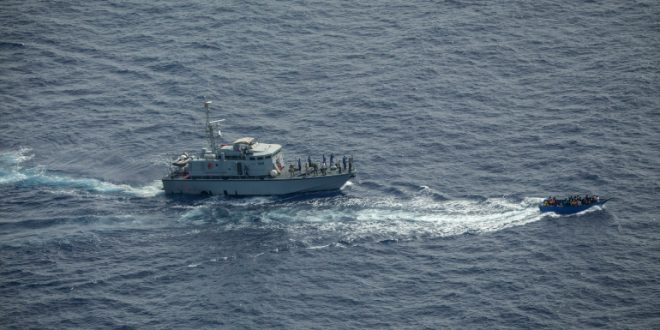 An overcrowded migrant boat, right, tries to escape from the Libyan Coast Guard in the Mediterranean Sea, Wednesday, June 30, 2021. A non-profit sea rescue group is denouncing the Libyan Coast Guard and the European Union after it witnessed and filmed the Libyan maritime authorities chasing a crowded migrant boat and shooting in its direction as it tried to stop it from crossing the Mediterranean Sea to Europe. The video was filmed Wednesday by members of Sea-Watch as they flew over the Central Mediterranean during an observation mission and caught the incident on camera from their plane. (Sea-Watch.org via AP)

The Libyan Coast Guard rescued 100 illegal migrants of varying African nationalities, who were on board two wooden and rubber boats, heading towards the European coasts.

The Information Office, headed by the Staff Officer of the Libyan Naval Forces, stated that the Coast Guard, having received a distress call, launched one of its vessels after completing the necessary equipping for the recovery operation of rescue and recovery to the north of Zuwara, where the migrants were located.

The office added that the migrants were later disembarked at the landing point in Zawiya refinery and were handed over to the competent authorities for processing.