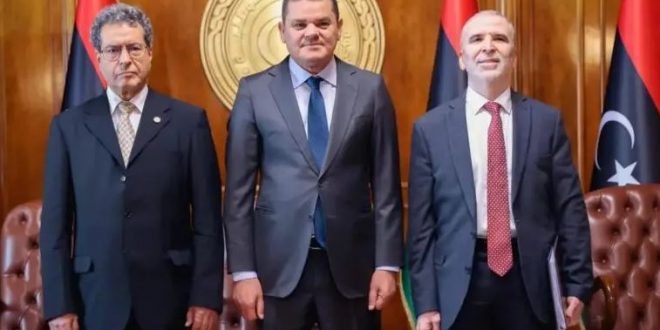 The decree (50/2021) said Sanalla had failed to obtain permission from the Ministry before travelling abroad on official business; failing to present reports; failing to keep to the administrative organization; failure to transfer certain departments to the Ministry; appointing a board member as chairman of the NOC in contravention of regulations.

The decree said Sanalla is suspended until further notice, and it will be up to the Administrative Control Authority (ACA) to decide if he is reinstated or sacked.

It will be recalled that in September Prime Minister Aldabaiba held a summit meeting with Aoun and Sanalla after a major public fallout between the two.

Aoun had then suspended Sanalla as NOC Chairman as of 28 August and had referred him for administrative investigation.

Aoun had claimed that Sanalla had broken a government rule that all leading government employees must seek permission before travelling abroad. Sanalla had ignored the rule.

Sanalla had also been referred for investigation for refusing to allow his temporary successor to take over his post and for running the NOC whilst he was abroad.

JusticeNatural Resources Governance
All
2021-10-19
asaeid
Previous NOC condemns kidnapping of two of its employees – demands their immediate release
Next What the Libyan people want is simple: a democratic political system free from corruption