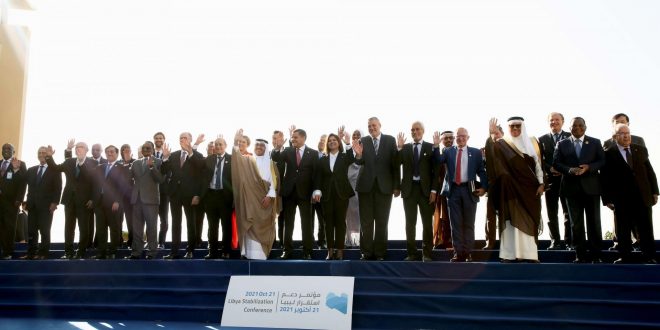 The Libya Stabilisation Conference’s concluding nine-point statement delivered today by Foreign Minister Najla Mangoush reiterated the need for elections to be held on the prescribed time of 24 December this year. There had been some expectations that the conference could be used as the springboard to delay the elections to spring 2022.

Here is the full text:

‘‘Today in Libya, we were honoured by the presence of high-level representatives of governments participating in the ministerial conference on the Libya Stability Initiative.

The following points were emphasized:

1- The permanent, firm and strong commitment of the Government of National Unity to the sovereignty, independence, territorial integrity and national unity of Libya, and its categorical rejection of foreign interference in Libyan affairs, and its condemnation of attempts to violate the arms embargo and foment chaos in Libya.

4- Commending the pivotal role of the United Nations in supporting stability in Libya, as well as the efforts of the African Union and its High-level Committee of Heads of State and Government of the African Union concerned with Libya, the Quartet, the European Union, the League of Arab States, and the neighbouring countries of Libya in this regard.

5- The importance of taking the necessary measures and entitlements to build confidence and create an appropriate environment for holding national elections in a fair, transparent and inclusive manner on December 24, 2021.

6- Ending the conflict and achieving security and stability in Libya is a basis for peace and state-building, a pillar of peaceful coexistence, and a motive for the acceleration of the economy and development.

8- The Libyan government’s support for the efforts made by the 5 + 5 Joint Military Committee in the full implementation of the terms of the ceasefire agreement and the action plan approved in the thirteenth round of work of the committee held in Geneva during the period from 6 to 8 October 2021.