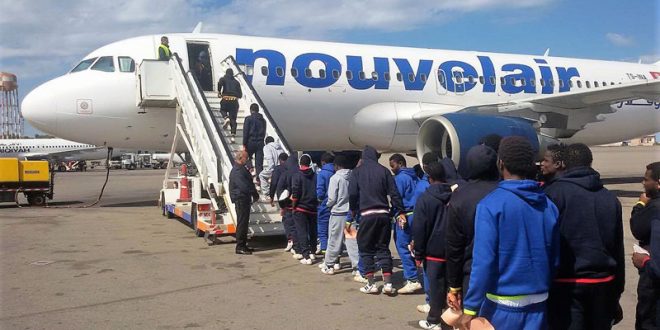 The United Nations said on Friday that it has resumed humanitarian evacuation flights for migrants stranded in Libya after authorities suspended them for several months. The announcement comes after a massive crackdown on migrants by Libyan security forces.

The U.N.’s International Organization for Migration (IOM) said in a statement that it had evacuated 127 people to Gambia from the Libyan city of Misrata on Thursday. It said the Gambian migrants were among thousands more who are waiting to go home through the organization’s voluntary return program.

Evacuation flights for migrants have operated sporadically amid Libya’s conflict, and been periodically suspended because of fighting. The latest suspension came from the country’s ministry of interior on August 8, according to the IOM.

Libya was plunged into turmoil by the NATO-backed 2011 uprising that toppled and killed longtime dictator Muammar Gaddafi. The North African nation has since emerged as a popular, if extremely dangerous, route to Europe for those fleeing poverty and civil war in Africa and the Middle East. Many set out for Italy, packed by traffickers into unseaworthy boats.

Earlier this month, Libyan authorities started a massive crackdown against migrants in the western coastal town of Gargaresh, detaining more than 5,000 people over the course of a few days. In response, many turned to a community center operated by the UN’s refugee agency’s office in nearby Tripoli, camping outside and asking to be evacuated.

On Friday, the UNHCR refugee agency said that there are still 3,000 vulnerable people staying outside its community center for fear of government raids. The agency said it had suspended the center’s operations for security reasons but was still able to offer some limited provisions to the migrants there. It welcomed the resumption of humanitarian flights, but also called on the government to urgently address the needs of asylum-seekers and refugees in a “humane and rights-based manner,” especially those who cannot return to their countries of origin.

Detained migrants in Libya have been held in overcrowded detention centers where torture, sexual assault and other abuses are rife. U.N.-commissioned investigators said October 4 that abuse and ill treatment of migrants in Libya could amount to crimes against humanity.

The migration agency has operated evacuation flights for those wanting to return home since 2015 and since then returned some 53,000 migrants. The program receives funding from the European Union and the Italian Ministry of Foreign Affairs’ Migration Fund, according to the IOM statement.

Humanitarian IssuesInternational Relations and CooperationTrafficking and Migration
All
2021-10-22
asaeid
Previous Thousands of refugees and migrants plead for Libya evacuation
Next First group of 60 members of ceasefire monitors arrives in Tripoli: 5+5 JMC member