Home / Normal / UNSMIL statement on the JMC meeting in Cairo with representatives of Chad, Niger, and Sudan and agreement on establishing communication and coordination mechanism with neighboring countries 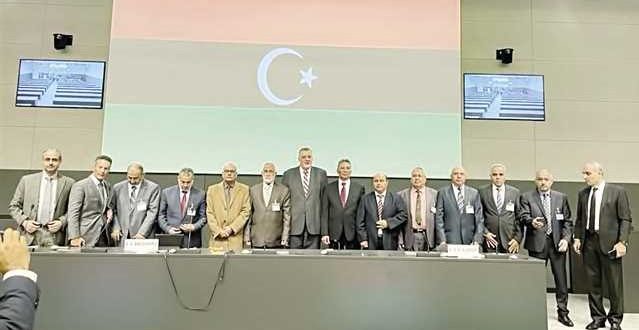 UNSMIL statement on the JMC meeting in Cairo with representatives of Chad, Niger, and Sudan and agreement on establishing communication and coordination mechanism with neighboring countries

The 5+5 Joint Military Commission (JMC) concluded on 1 November a three-day meeting in Cairo, where they agreed with representatives of Chad, Niger, and Sudan on establishing an effective communication and coordination mechanism to support the implementation of the JMC Action Plan for the departure of mercenaries, foreign fighters, and foreign forces from the Libyan territories as a gradual, balanced, synchronized, and sequenced process. The mechanism will enable taking the first steps in the withdrawal process that will take fully into account the needs and concerns of Libya and its neighbors.

Building on the JMC’s Action Plan for the departure of mercenaries, foreign fighters, and foreign forces from the Libyan territories, signed in Geneva on 08 October, which was approved by the Libyan authorities, the mechanism envisages the establishment of communication and coordination committees in Libya and neighboring countries that will be tasked with communicating and coordinating the withdrawal of mercenaries and foreign fighters as well as the holding of meetings during the implementation process between the JMC and Libyan authorities and representatives of the neighboring countries of Chad, Niger, and Sudan. It highlights the important role of international parties, including international and regional organizations in support of this process. In every country, that mechanism will be established in coordination among their respective authorities. The JMC reaffirmed the importance to reach out and coordinate with all neighboring countries to support the implementation of the Action Plan.

The Special Envoy of the Secretary-General and Head of the United Nations Support Mission in Libya (UNSMIL), Ján Kubiŝ, commends the continuous efforts of the JMC describing the outcomes of the meeting as “an important achievement enabling to take practical steps for the departure of all mercenaries and foreign fighters coming from these countries as a first step towards the full and timely implementation of 23 October 2020 Ceasefire Agreement, in line with UNSC resolution 2570 (2021).” “I am honored to witness this progress achieved by Libya, Chad, Niger, and Sudan, working in the spirit of common interest and partnership that will open the doors to sustainable stability, security, development, and cooperation in the region” Mr. Kubiŝ added. “This responds to the overwhelming demand of the Libyan people and further creates a positive momentum in light of the upcoming presidential and parliamentary elections on 24 December.” Mr. Kubiŝ also commends the Arab Republic of Egypt for hosting and supporting this important meeting, which was requested by the 5+5 JMC and facilitated by UNSMIL. This traditional role of Egypt contributed to the success of the meeting, as acknowledged by its participants.

The United Nations applauds the patriotism and commitment of the JMC working as one, encourages the JMC to seize this opportunity to further the full implementation of the Ceasefire Agreement, assisted by the UN through the deployment of the first group of UN ceasefire monitors, which took place on 21 October. The Mission, on behalf of the UN, calls on the member states to support the JMC and Libyan authorities, as well as the neighboring countries in implementing the departure of all mercenaries and foreign fighters in a manner that ensures the stability of Libya and all neighboring countries, and counts on continuous cooperation and coordination with the respective international and regional organizations, notably its traditional partners the African Union, League of Arab States, and European Union.