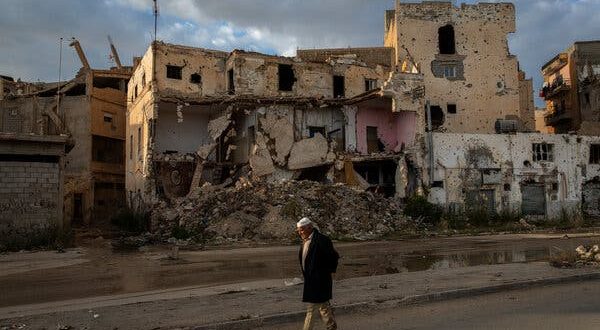 What has Libya’s uncelebrated ceasefire achieved?

We have just passed the first anniversary of the Libyan ceasefire agreement signed in Geneva last October, which brought to an end one of the bloodiest episodes in the country’s recent history, apart from an occasional flare up here and there. The agreement, although not yet fully implemented, was a milestone on the long road to peace after a conflict that has been on and off for most of the past decade. Oddly, little has been said or done to mark the anniversary, even by the Libyan factions, despite its importance.

The head of the UN mission in Libya, Jan Kubis, did highlight the anniversary, though: “We join the Libyan people in commemorating one year of the signing of the ceasefire agreement.” While the potential for violence is still there, this anniversary demonstrates that, among other things, Libyans working together can make peace.

The deal was concluded after long and difficult negotiations led by the former UN envoy Stephanie Williams. It was signed by the 5+5 Joint Military Commission (JMC), a committee of professional military officers representing the former government in Tripoli and Field Marshal Khalifa Haftar’s military command in eastern Libya.

Williams noted the anniversary in a tweet, calling it “historic”. She was also honoured by the German foreign minister for her work on the issue. Germany has hosted two conferences on Libya in the past two years, which led to the formation of the JMC.

In his statement, Kubis said that the JMC’s success a year ago “paved the road for the Libyan-led and owned comprehensive political process,” which culminated in the formation of the Government of National Unity and a new presidential council, and an agreement to hold presidential and legislative elections on 24 December.

The JMC’s 8 October meeting in Geneva concluded with a Libyan Action Plan intended to be a roadmap to remove all foreign troops and mercenaries from the country. Kubis hailed the Action Plan as another JMC success, but the plan itself still lacks details about how the foreign forces will be removed from Libya, a key part of the ceasefire deal and a requirement of UN Resolution 2570. In the UN envoy’s words, there will be a “gradual, balanced, and sequenced process” of getting mercenaries, foreign fighters and foreign forces out. The withdrawal of such mercenaries appears to be conditional on the fact that returning fighters to their respective countries does not have a negative impact on the internal situation therein.

There are an estimated 20,000 troops and mercenaries on Libyan soil, virtually all beyond Libyan control. Between 2017 and 2020 thousands of mercenaries from Syria, Russia, Sudan, Niger and Chad flocked to Libya supporting different sides in the civil war. In 2019 Turkey struck a security deal with Tripoli’s former government allowing Ankara to send in hundreds of troops and thousands of Syrian mercenaries to bolster Tripoli’s defences against Haftar’s forces attacking the capital. Despite the support of mercenaries from half a dozen countries, Haftar’s 13-month military campaign to take Tripoli ended in defeat in June 2020, a few months before the ceasefire agreement was signed.

What the action plan really means was the subject of the most recent JMC meeting in Cairo on 30 October, but no concrete agreement was reached after two days of discussions. Notably, and for the first time, the Cairo meeting was attended by representatives from Chad, Niger and Sudan, Libya’s southern neighbours with mercenaries in the country. How much control such governments have over the mercenaries isn’t clear, but their participation in the JMC meeting suggests that they are willing to discuss the repatriation issue.

Unfortunately, Chad, Niger and Sudan have their own internal conflicts and are unstable. They have little incentive to welcome back fighters, many of whom oppose their respective governments.

Turkey did not take part in the Cairo meeting, despite having regular troops supported by thousands of Syrian mercenaries inside Libya; neither did Russia. Moscow has always denied any links to the thousands of Wagner Group mercenaries in Libya, claiming that they are under the control of a private company that has nothing to do with the government.

As well as the evacuation of foreign forces from Libya, the JMC is also supposed to come up with some sort of arrangement to disarm the militias. Dozens of them still wield considerable power and influence, including in Tripoli and other parts of western Libya. This remains a contentious issue that has to be dealt with.

The same goes for Haftar’s self-styled Arab Libyan Armed Forces controlling eastern and parts of southern Libya. These forces are not integrated into the unity government’s military structure. By maintaining his forces independent of the government, many suspicions are being raised about Haftar’s intentions. He is said to be preparing to contest December’s presidential election.

Despite its success in helping to create the political momentum that gave Libya its first unity government in seven years, the JMC’s work could easily be derailed if the elections do not take place or their outcome is not respected by all parties in the country. In the run up to 24 December, the political horizon remains foggy, at best, with foreign fighters and mercenaries still likely to be in Libya, which must accept the fact that nobody is leaving and the elections must go ahead as planned.

The fact that the JMC has met regularly, mostly in Libya’s Sirte, suggests that a return to war is unlikely, at least in the short term, or until after the elections take place. However, ignoring the ceasefire’s first anniversary indicates the existence of deeper suspicions among the different local political and military actors.

Political TransitionSecurity Situation
All
2021-11-04
asaeid
Previous UNSMIL statement on the JMC meeting in Cairo with representatives of Chad, Niger, and Sudan and agreement on establishing communication and coordination mechanism with neighboring countries
Next Why does the Arab League condemn Turkey’s efforts in Libya and stay silent about Israel?