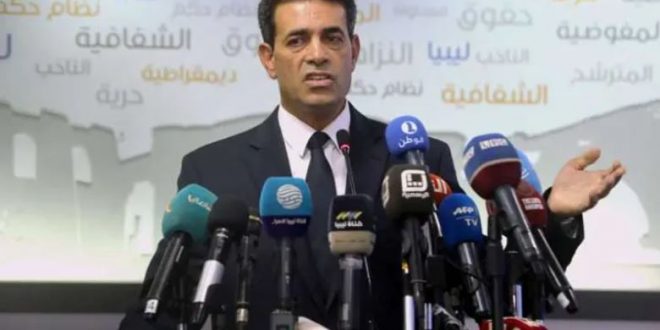 The head of Libya’s High National Elections Commission (HNEC), Emad al-Sayeh, announced at a press conference yesterday in Tripoli the opening of registration for candidacy for the presidential and parliamentary elections starting tomorrow.

He also announced the opening of polling stations starting today and until the 28th of this month, to distribute more than 2.8 million voter cards through 1,906 polling centres spread all over the country.

Al-Sayeh stressed that voters will not be able to receive their electoral card unless they presents identification papers to prevent fraud. He called on all voters to receive the cards issued in their names, which will give them the right to vote in the parliamentary and presidential elections, on 24 December.

House of Representatives accepted all HNEC technical amendments for both elections

Al-Sayeh pointed out that HNEC had received from the House of Representatives all technical amendments related to the parliamentary and presidential elections laws, “which would enable HNEC to implement the two electoral processes without challenging the procedures for their implementation.”

The controversial dates of the elections

During the question and answer session with the media, Al-Sayeh said:

– We believe that the parliamentary elections will be held 52 days (14 Feb 2022) after the first presidential round.

– The date of the first round of the presidential elections will be on December 24, and the second round will be held with the parliamentary elections.

– The specified period between the first and second rounds is 30 days according to the law, but in addition to the period available for preliminary results, appeals and final results, this will take about 52 days.

– HNEC has not received the amendments to Article 12 of the Presidential Election Law from the House of Representatives.