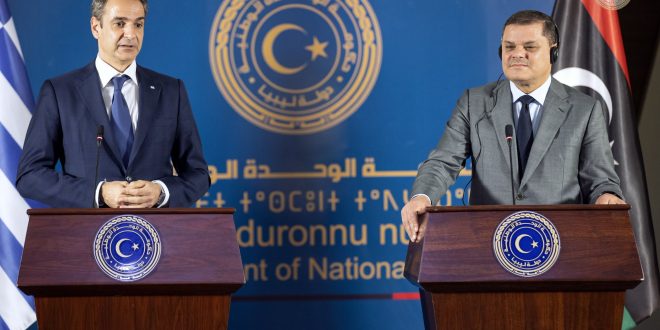 During Greek Prime Minister Kyriakos Mitsotakis’ visit to the capital of Saudi Arabia at the end of October, the second this year, both countries announced the establishment of a bilateral Supreme Cooperation Council.

As the Greek government continues with efforts to find a way out of an economic crisis exacerbated by the pandemic, this could be a positive step for Athens.

The council will meet in the first half of 2022 to promote the expansion of trade as well as cooperation in the fields of clean energy, tourism, and investment.

Athens, which seeks to establish itself as an important player in the region, has made a path towards the capitals of the Middle East, especially Gulf countries, which many interpret as a geopolitical plan with both military and economic implications.

Indeed, Greek-Saudi ties have prospered over the past two years. In April, the two countries announced the signing of a military agreement to send a Greek Patriot air defence system to Saudi Arabia.

The deal came at a critical time, as only a few months later Washington announced the reduction of its military presence in the region, which included the withdrawal of its own Patriot missile system from Saudi Arabia.

The agreement between Greece and Saudi Arabia was preceded by a generally positive trend between the two countries, with Riyadh taking part in several military air exercises with Athens and Saudi officials, led by Foreign Minister Faisal bin Farhan, supporting the Greek Cypriot position in the face of tensions with Ankara.

Tensions with Turkey, which increased significantly in the summer of 2019, were one of the most important turning points in Athens’ regional reorientation. They also changed the view of a number of Middle Eastern countries regarding Greece’s role in the region.

The escalation, which culminated in July 2019 as a result of the movement of Turkish research ships in disputed areas with Greece, was exploited by Athens, first through military means and then through diplomatic avenues, as Greece portrayed itself as a front line against Ankara.

Tensions between Saudi Arabia and Turkey, the result of an accumulation of crises that began with Turkey supporting Doha during the Gulf blockade and escalated with the murder of Saudi journalist Jamal Khashoggi, pushed Riyadh and other countries wary of Ankara’s policies in the region closer to Greece.

The UAE and Israel are the two most important pillars for Athens in the Middle East, an official from the Greek Ministry of Foreign Affairs told The New Arab, and relations with both countries have evolved rapidly in recent years.

Athens, which signed up to the Eastmed Pipeline with Israel and Cyprus as the most important step in economic co-operation between the two sides, in spring concluded a $1.7 billion construction contract for a military training airport with one of Israel’s most high-profile defence contractors, Elbit Systems.

This close cooperation was followed by assurances from officials of both countries about the importance of joint military cooperation between the two sides, which prompted Chief of Staff of the Israeli Defence Forces, Aviv Kochavi, to place Greece among Israel’s top allies against Iran.

Greek-Emirati relations proceeded along a similar trajectory, but faster. In November 2020, during Greek Prime Minister Kyriakos Mitsotakis’ visit to Abu Dhabi, the two sides announced the signing of a major military agreement focusing on joint military assistance that commits each side to protecting the other in the event of war.

This agreement was unique for Athens, which until then did not have a common military defence pact with any other country except Cyprus.

Certainly, this document was part of a broader rapprochement between the two countries, which included a convergence of views on more than one issue, the most important of which were tensions with Ankara, the Libyan conflict (both sides’ had good relations with east Libya, the Libyan parliament, and General Khalifa Haftar), and the Syrian war, with both rejecting Turkey’s role.

Emirati warplanes also took part in military exercises in Greek airspace, and Abu Dhabi was the first country to provide medical support to Athens during the coronavirus crisis through emergency medical missions to support the Greek health system.

Amidst Greece’s important military relations with Saudi Arabia and Israel, and the defence agreement with the UAE, the common denominator as an enemy of these three countries is Iran.

Nevertheless, Athens still refuses to appear in domestic media and in its public discourse as a direct enemy of Tehran. Moreover, official statements from the current Greek government about negative developments between the allies of Athens and Tehran tend to avoid direct criticism of Iran.

Yet, Greek-Iranian relations are going through a phase of remarkable political and economic stagnation, especially since the US economic sanctions imposed on Tehran. Athens’ new military and diplomatic policy has contributed even more to the coldness of these relations, which in the past were characterised as distinguished, as Athens was the first European country to resume importing Iranian oil after the lifting of sanctions in 2018.

Meanwhile, the volume of trade between Saudi Arabia and Turkey was three times higher than with Greece in 2020, despite the crisis in relations between both countries.

Undoubtedly, the government of New Democracy led by Kyriakos Mitsotakis has taken several important steps to improve relations between Greece and its allies in the Middle East. But despite the positive aspects from a geopolitical point of view, these policies may also have been hastily considered.

Greece is currently engaged in an alliance against Iran on the UAE’s coast and on Israel’s northern fronts. It has also been on the front line against Houthi missiles and their drones against Saudi Arabia.

Is this new reality, in terms of security and defence, appropriate for a country where one-third of the GDP is based on tourism and foreign investment, which require both stability and security?

International Relations and Cooperation
All
2021-11-08
asaeid
Previous Returning to ruined city, Libyan family struggles to rebuild
Next Will Dbeibeh run for the presidency again … and win?