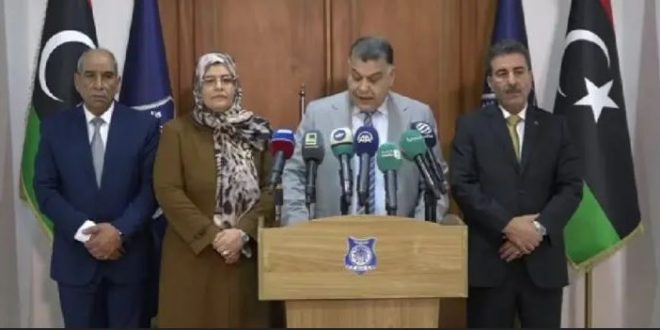 The warning comes a day after the government and the UN expressed concern over an intimidation campaign that has shut the court where the son of slain dictator Muammar Gaddafi tried to appeal his rejected presidential bid.

The December 24 polls come as part of a push to end a decade of violence in oil-rich Libya following a NATO-backed uprising that toppled and killed Gaddafi in 2011.

“The continued obstruction of security plans, and worsening violations and abuses… will directly impact the conduct of the elections and our commitment to holding them on time,” Mazen told reporters in the capital Tripoli.

In theory, the North African country is preparing to draw a line under a decade of conflict since its 2011 revolution.

But despite a year of relative calm since a landmark ceasefire between rival eastern and western camps, Libya’s deep political divisions remain.

“We must not continue on a path that would lead to the deterioration of the security situation until it is out of control,” Mazen said, speaking alongside the justice minister.

He warned that the current circumstances would not permit elections to take place “normally”.

Last Wednesday, Libya’s electoral commission announced the rejection of the candidacy of Gaddafi’s son Seif al-Islam, who is wanted by the International Criminal Court for alleged war crimes.

Unsuccessful applicants were given 48 hours to appeal in court.

But hours before Seif al-Islam was expected to submit his documents, a “group of outlaws” launched an “odious” attack on the court in the southern city of Sebha, the government said.

On Tuesday, the judicial commission responsible for examining Seif al-Islam’s appeal said it had suspended any ruling on the appeal indefinitely.

Both presidential and legislative polls had been slated for December 24, but in early October parliament split the dates, postponing the legislative elections until January.

The path to the ballot box has been lined with disputes over the constitutional basis for the polls and the powers to be given to whoever wins.