Home / Normal / How Bangladeshis are lured into slavery in Libya 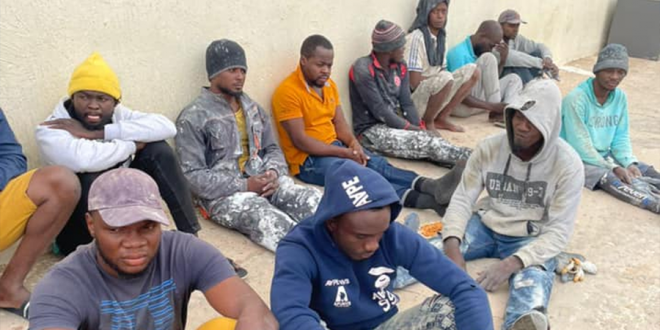 How Bangladeshis are lured into slavery in Libya

In our series of letters from African journalists, Ismail Einashe meets a man who recounts how he was tricked into going to work in Libya – and how he escaped.

A young Bangladeshi migrant in the Italian city of Palermo sits uneasily shuffling in a chair and playing with his mobile phone as he recounts the harrowing experience he had in Libya.

In December 2019 aged 19, Ali – whose name has been changed to protect his identity – decided with his parents’ blessing to embark on a risky journey in search of work.

He was spurred on after he met a “dalal”, or travel agent. In reality they are human traffickers who run sophisticated operations on social media to lure young Bangladeshis with the promise of riches.

Another Bangladeshi now in Sicily explained how he was able to leave in 2016 at the age of 15 thanks to the dalals.

“My family wanted me to migrate but as a minor I could not, so they decided to pay the dalal to get a fake passport,” he said, adding that the document gave his age as 21.

The dalal who befriended Ali constantly encouraged him to leave for Libya, even inviting him around to dinner at his home.

The youngster had been working at a cosmetics store in a suburb of Bangladesh’s capital, Dhaka, for a couple of years, trying to support his family in a village by the Padma River outside the city.

The dalals capitalise on the hopes of young people like Ali trying to escape poverty and hemmed in by a lack of opportunity.

But few of those who leave know that Libya is a country marred by a brutal civil conflict – and that the reality for those trafficked there is one of misery, exploitation and slavery.

“I had no idea about Libya,” Ali admits.

The dalal ended up meeting his parents, telling them that their son could earn $500 (£380) a month working in Libyan factories.

Ali’s parents said they did not have the money to pay for his journey, but after finding out what assets they had – three large prized cows – the dalal encouraged them to sell one animal to finance it.

It took Ali a week to reach Libya – leaving by bus from Dhaka to the Indian city of Kolkata then on various flights passing through Mumbai, Dubai and Cairo.

When he landed at Benghazi airport, he says he found a “chaotic” city with no security or police.

He was immediately taken by the local handlers of his dalal to a prison where they took away the money he had – and then held him for ransom.

His parents had to sell their two last cows to raise the money to free him.

His jail was a small room with no mattresses that he shared with 15 other Bangladeshis. Those unable to pay the ransom money were not fed and roughed up.

“They beat someone in front of me who had blood pouring from his groin. They didn’t help him or take him to hospital,” Ali says.

In recent years the security situation has become much worse in Libya for Bangladeshis held by traffickers.

In May 2020, 30 migrants, 26 of whom were from Bangladesh, were shot dead in a warehouse in Mizdah near the capital, Tripoli.

A survivor said their families had been unable to pay the ransoms.

When Ali was eventually released he ended up working for the traffickers in a water-bottling plant for three months in Benghazi before heading to Tripoli to work in a tile factory.

Like many of the 20,000 Bangladeshi nationals currently estimated to be in Libya, he was treated badly – not paid and living in intolerable conditions.

Bangladeshis such as Ali, not pictured, are often among the top three nationalities crossing the Mediterranean from Libya

“If we stopped working we were beaten, kicked and thrown to the ground. One time one of us broke a tile, then a man came and kicked the guy,” Ali says.

The teenager was living with the owner of the tile factor under lock and key.

“The owner took us to work and then when we were done he took us home. There were two guards watching us. We didn’t get paid for the job, there wasn’t enough food and so we wanted to run away.

“One of us tried, but he fell from the second floor and broke his leg.”

After various failed escape attempts, a kindly Libyan helped Ali find refuge at a mosque. He felt his only option was to contact traffickers again, this time to cross the Mediterranean Sea to Italy.

His parents again found the money – he estimates the entire journey from Bangladesh to Italy has cost his family about $4,000, leaving them in long-term debt.

Abandoned migrant boats can be seen on beaches in southern Sicily

The crossing in July last year turned out to be another terrifying ordeal for him and the other 79 migrants on board the dingy.

“For two whole days we only saw the sea, no land. Then we saw two sharks in the distance, at which point some said they were coming to eat us. I thought: ‘We’re done!'”

They were eventually rescued and taken to the island of Lampedusa before being moved to Sicily.

Ali now lives in a large migrant camp on the outskirts of Palermo, Sicily’s capital, with other young migrants from places like Nigeria, The Gambia and Senegal.

In Libya he said there was no contact between the Bangladeshis and other nationalities – the prisons operated by traffickers were organised along ethnic lines.

Ali has temporary documents which allow him to work in Italy, but his application for humanitarian protection has been denied – something he is appealing against.

He is adapting to the new cultural mix of Palermo and now works in a Sushi restaurant alongside African migrants.

Unlike in Libya, Ali says, Bangladeshis and Italians mix freely in Palermo

Like other recent arrivals with little bargaining power, he is paid much less than a Sicilian would accept, earning about $870 a month working six long days a week – but he does manage to send $570 of that back home.

In recent years there has been a sushi craze in Palermo, but with few Japanese people living in the city, Chinese restaurateurs have stepped in – sushi rolls can often come with prawn crackers and fortune cookies.

Ali, who had never heard of sushi before arriving here, is slowly coming to enjoy the taste of raw fish – and it is influencing his ambitions.

“I would like to learn how to make sushi completely – and learn Italian,” he says.