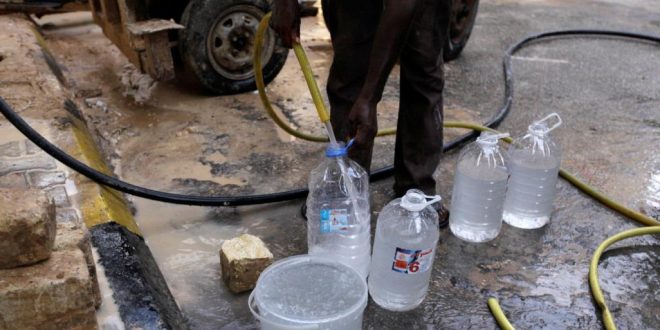 How dirty water in Libya’s schools is poisoning children

Reports show drinking water in Libyan schools is highly contaminated and a probable cause of recurring disease in schoolchildren. Years of neglect have left water infrastructure decimated, with worrying ramifications for public health.

Dangerous levels of bacteria and heavy metals have been found to contaminate the running water in Libyan schools across the country. This has turned water into a spreader of disease among Libya’s children, resulting in some cases from water sources becoming contaminated by sewage despite Libya not lacking the resources needed to reform the water quality monitoring system and hygiene regulations in schools.

Salim Mansour (11) suffers from a severe allergy and blisters on both hands caused by the unclean water in his school in Abu Eissa, a village in Zawiyah municipality, northwest Libya, according to his grandmother Imbaraka Muhammad Mansour. She says she noticed the impact polluted water was having on schoolchildren during her 32-year career in the education sector.

Contaminated water: Not a new issue

Working as a teacher, then headmistress before becoming a school inspector, she confirms that skin problems were one consequence of unsanitary water in schools which she witnessed time and again.

She remembers that when she was an inspector they ran tests to measure the water salinity in schools in the area to find salinity levels as high as 5,000 mg per litre in some cases. The WHO guidelines on drinking water state the maximum should be 1000 mg per litre though preferably it should be under 500 mg per litre.

One indicator of contaminated water is a bitter taste which makes it difficult to drink. This is because it has become mixed with sewage, says Mansour, adding, “the ministry is showing no interest in water sanitation in schools. It used to provide schools with disinfectants like chlorine to kill the bacteria in their water tanks, but they have stopped doing this.”

She says she wrote to the West Zawiyah municipality repeatedly about the issue of water quality in schools and they claimed to have plans to connect the region with a water purification plant, but this never happened.

The problem of polluted water is growing in Libya but is not new. Two detailed studies attest to this, the first carried out by chemical engineering professors in Janzour. Their study was published in the Libya Journal of Applied Sciences and Technology in 2013 and focused on polluted groundwater in the Zawiyah Jadida area. The lack of a public sewage system had forced residents to resort to septic tanks underground.

Because the tanks were not lined with the correct materials upon installation, sewage water had leaked into the groundwater. A similar situation occurring in Ajdabiya city was outlined by the study Hydrochemical study of some groundwater wells in Ajdabiya, published in 2016. The study showed that most of the samples showed the presence of E. coli bacteria and other contaminants, which made the water unsafe to drink.

However, regarding water pollution in schools specifically, UNICEF and the National Centre for Disease Control (NCDC) undertook an assessment of water quality, sanitation and hygiene in Libyan schools, the findings of which were published in May 2018 and showed that around half of the schools from which samples were taken (140 in total) suffered from both limited water supplies and poor water sanitation. It found that 54 percent of sampled school water showed bacterial contamination.

In addition to this, 46 percent of the samples showed the presence of faecal coliform bacteria and 10 percent showed E.coli contamination. The WHO states that no coliform bacteria should be present in safe drinking water. The bacteria pose a threat to children particularly, causing diarrhoea which can lead to severe dehydration.

Al-Araby Al-Jadeed, The New Arab’s Arabic-language sister publication, ran a questionnaire that was distributed to 86 families who had children in schools. From this, 47.7 percent said their children had suffered from health issues due to the school water: 26.7 percent suffered from diarrhoea repeatedly during term time and the same number had experienced urinary tract infections (UTIs).

According to Dr Huda el-Barani, head of the paediatric department at the Badri Governmental Health Complex in Tripoli, diarrhoea is the most common symptom indicating the presence of microbes whether from drinking water or contaminated food, adding, “It can also indicate chronic diseases caused by parasites like those which cause amoebic dysentery: this is caused by drinking water contaminated with sewage.”

Furthermore, 16.2 percent of the children had fluorosis according to the questionnaire, a condition causing yellowing of the teeth, caused by excess levels of fluoride in drinking water. According to UNICEF’s assessment, 9 percent of samples exceeded the acceptable limit of fluoride (1.5 mg per litre).

Exposure to high concentrations of fluoride for extended periods leads to poisoning of the tooth enamel and bones. However, insufficient fluoride levels (less than 0.5 percent) which were detected in 57 percent of the samples, are also considered a public health concern according to the WHO as a certain level of fluoride protects against tooth decay.

High nitrate levels were found in 31.4 percent of samples; the highest reading was 72 mg per litre. According to Libyan specifications, the maximum level of nitrates allowed in drinking water is 10 mg per litre.

El-Barani explains that excessive nitrate levels in water cause various health problems, the most serious of which is known as “blue baby syndrome”. This is when nitrates bind to the haemoglobin in the blood and prevent it from transporting oxygen around the body. It is a serious condition that can be fatal in babies especially in their first six months.

For older children and adults, a high intake of nitrates can cause nausea, colic and heart palpitations. Nitrates can also convert into nitrosamines inside the body – potentially carcinogenic compounds that researchers have proven can cause cancer in animals.

No monitoring of water quality

Dr Fawzia Bin Ghashir, the head of the social services and school health department of the education ministry says there used to be a health inspection service for schools which ran regular visits to monitor toilet facilities, water tanks, school meal quality and which also organised infectious disease prevention through vaccinations and other measures. However, it was cancelled in the nineties.

Today a school health department still exists, but health inspections are not included in its tasks. Bashir al-Akhdar, an educational supervisor in Zawiyah says that the operational budget for schools each term only covers simple maintenance and doesn’t provide for water quality control measures.

Bin Ghashir believes the UNICEF report is misleading because if that many schools’ water supply was contaminated then Libya would have witnessed the rampant spread of diseases like Ebola. However, Dr el-Barani thinks the spread of the disease has been relatively low because many families forbid their children from drinking tap water in schools – 26 percent of respondents in the questionnaire said their children took bottled water to school.

UNICEF’s report showed that 94 percent of schools had no system in place for maintenance of toilet facilities and that the average number of students per functioning toilet was 71, although the education ministry recommends at least one toilet per every 25 students. Moreover, most schools lacked soap for handwashing, the reason cited being a lack of funds. 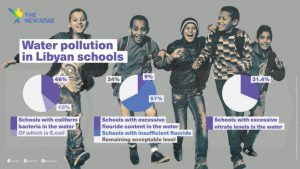 The high incidence of UTIs in children is likely a result of this, says el-Barani. Caused by bacteria entering the urinary tract, infections can travel up to the bladder and kidneys. She explains that various factors which increase rates are: not drinking enough water; not going to the toilet for extended periods and not going when needed. Likewise, E.coli is a major cause of UTIs and unsanitary toilets and unhygienic practices also aid the spread of infection. All these factors are an issue in Libyan schools making children especially susceptible to infection.

Dr Idris Qaid, a paediatric consultant and former adviser to the WHO says: “We don’t have any statistics on the spread of diarrhoea or other illness among schoolchildren whether due to contaminated water or other reasons. For example with diarrhoea, the microbial analysis needed to diagnose the cause is not taken. It is usually seen as sufficient to give the children some rehydrating salts and advise the parents to make sure they drink lots of fluids.”

Khaled Ghalam is a professor at Tripoli University whose children are in primary school. He says: “Safe drinking water and clean toilets are a basic right, and the lack of these fundamentals is negatively impacting academic achievement as well as spreading disease.”