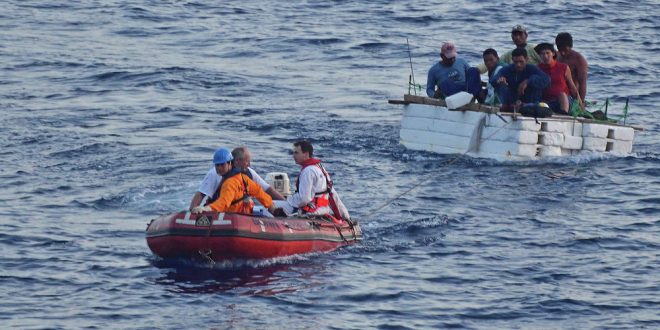 A leading rights group on Monday urged the European Union to reverse its migration policy on Libya, saying the approach helps return migrants to “hellish” conditions in the North African country.

Amnesty International said in a statement more than 82,000 migrants were intercepted and returned to Libya in the past five years since the EU began its cooperation with Libyan authorities to block migrants from reaching European shores.

Many of those who have been returned to Libya — including women and children — are held in government-run detention centers where they suffer from abuse, including torture, rape and extortion, the group said. Other migrants were forcibly disappeared, Amnesty said.

“EU leaders’ cooperation with Libyan authorities is keeping desperate people trapped in unimaginable horrors in Libya,” said Matteo de Bellis, a migration researcher at Amnesty International. “It is high time to put an end to this callous approach.”

Libya plunged into turmoil following the NATO-backed 2011 uprising that toppled and killed longtime dictator Muammar Gaddafi. The North African nation has since emerged as a popular, if extremely dangerous, route toward Europe for those fleeing poverty and conflict in Africa and the Middle East.

Human traffickers have benefited from the chaos in the oil-rich nation, smuggling migrants through the country’s lengthy border with six nations. They pack desperate migrants into ill-equipped rubber boats, then embark on risky voyages across the Mediterranean Sea.

In recent years, the EU accelerated efforts to stem the flow of migrants through Libya. Some 455 million euros ($516 million) have been earmarked for Libya since 2015 through the EU’s Trust Fund for Africa, substantial amounts of which have gone to finance migration and border management.

The EU money, much of it funneled through Italy, has been used to train staff and refurbish boats for Libyan authorities. The Libyan coast guard also received satellite phones and uniforms and will get three new patrol vessels in the next two years.

U.N.-commissioned investigators said in October that abuse and ill treatment of migrants at sea, in detention centers and at the hands of traffickers in Libya amount to crimes against humanity.

That has added to growing criticism to Europe’s migration policies. At least three requests have been filed to the International Criminal Court, demanding that Libyan and European officials, as well as traffickers, militiamen and others be investigated for crimes against humanity.

Amnesty said Libya’s current government has continued to facilitate “further abuses and entrench impunity.” It cited last month’s appointment of Mohammed Al-Khoja, a militia leader implicated in abuses against migrants, to head the Department for Combating Irregular Migration, which oversees the detention centers.

De Bellis called for the EU and its member states to stop the current approach, and instead focus on opening urgently needed legal pathways for the thousands trapped in Libya in need of international protection.

Humanitarian IssuesInternational Relations and CooperationTrafficking and Migration
All
2022-01-31
asaeid
Previous Libya abandoning migrants in the desert without water, warns UN officer
Next Libya PM: Gov’t will continue to function until elections