Home / Normal / ‘I will leave no stone unturned’, vows UN Advisor after returning to Libya 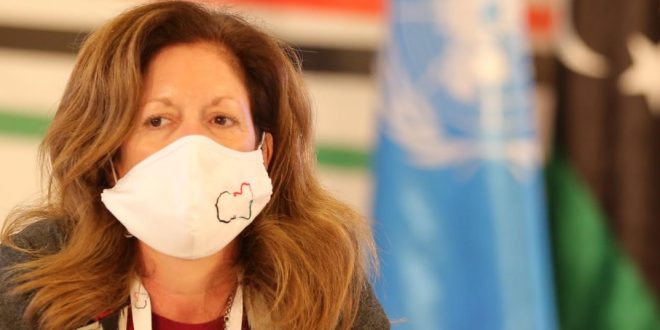 ‘I will leave no stone unturned’, vows UN Advisor after returning to Libya

The reappointment, earlier last December, of Stephanie Williams as Special Advisor on Libya to the United Nations Secretary-General, Antonio Guterres, came at a critical moment for the political process in Libya.

The election date of 24 December was fast approaching, while everything on the ground was pointing to the polls being delayed. Her arrival in Libya, six days after her appointment, is only another indication of the urgency of the situation in the country. By 23 December, Libya’s electoral commission announced that it was delaying the presidential polls, while proposing 24 January as a new election date. However, even that was missed and a new date is yet to be agreed upon.

Mrs. Williams, after all, is credited with bringing Libyan factions together: had them elect Prime Minister, set up a Government of National Unity (GNU), approve a roadmap out of the conflict and, above all, sign a cross-country ceasefire. Except for the military part, all the rest was achieved through a series of marathon meetings of Libyan Political Dialogue Forum (LPDF) group she assembled and skilfully managed.

Compared to the usual failure of UN envoys in solving conflicts around the world, this is an “outstanding success.” A Tripoli-based analyst, speaking anonymously, said, “Libya is lucky to have Stephanie” before adding “the Iron Lady will certainly turn things around.” Many of the 74-LPDF group nicknamed her the “Iron Lady”, given her patience and ability to facilitate debates when deadlocks loom large overhead in negotiating rooms.

However, since December, the political landscape in Libya has changed but not necessarily for the better, making Mrs Williams’ job a little more difficult but she is not giving up yet.

In a detailed MEMO interview, she vowed, “I will leave no stone unturned” to help Libyans in their quest for “stability, peace, unity and prosperity” she added. If that requires visiting world capitals with stakes in the Libyan conflict or shuttling around vast Libya to meet different protagonists, Stephanie, as she likes to be called, is ready.

In her quest to help the country she feels “attached” to, she has visited Moscow, Ankara, Cairo and other capitals known to play a role in Libya. On top of that and, in the space of two weeks after taking her post, she met almost all political, civil, and social interlocutors across Libya.

Following every statement she has made and reading every word she said, gives the impression that the “Iron Lady” is, indeed, worried without openly saying it. One big worry is the fact that Libya’s Houses of Representatives (HoR) has drawn up its own roadmap and is bent on replacing current Abdul Hamid Dbeibeh— today, in fact. The HoR’s roadmap talks about elections no later than 14 months, while LPDF’s original roadmap, agreed to by all Libyan factions including HoR, calls for the polls to take place no later than June this year, after the original elections date of 24 December was missed.

HoR and Higher Council of State, a consultative body, appear to be in a rare agreement for the delayed elections, against the will of the majority of Libyans who want elections as soon as possible—a wish Mrs. Williams shares with them.

Indeed, the current GNU and Prime Minister Dbeibeh’s record of corruption and mismanagement cannot be defended, but replacing him at this time is a risky manoeuvre by HoR and its partner, the High Council of State. Besides, such a move distracts the parliament away from focusing on the overdue elections already promised to the Libyan people. Both institutions have run their course and their “shelf life” has already expired. However, such comments coming from Stephanie Williams seem to be wrongly interpreted by HoR to mean she is actually backing corrupt GNU, when she is not.

When asked about LPDF’s roadmap for the preparatory phase of the transitional period and if it means GNU’s mandate has already expired on 24 December, she said that is not the case. She explained that, when the document was adopted on 21 December, 2021, she wrote to both HoR and the High Council of State informing them that the roadmap will run for “for 18 months” ending in June, which is why she insists on elections taking place by then.

In an interview with The Guardian newspaper, she expressed her fear that “some people may now manoeuvre for a prolonged period of delay” for elections. In a MEMO interview last May, she also said that all Libyan institutions have lost legitimacy and that elections are the only way to renew that legitimacy.

When asked if she believes that the international community is doing enough to help Libya move forward, her answer appeared a polite reminder to the Berlin Conference member states that their support is “needed [now] more than ever, to achieve [what] was agreed upon” in that Conference. Germany hosted the first Berlin Conference on Libya in January 2020, and its decisions included the launch of the three tracks Williams is pursuing now, namely political, military and economic tracks. The UN Security Council adopted resolution 2510, blessing all of the conference decisions.

The military track appears to be a success showcase with its 5+5 commission regularly meeting while maintaining the 23 October 2020, ceasefire. Stephanie describes the commission, made up of equal military officers from east and west of Libya, as the “custodian of the ceasefire agreement.” 14 months have, so far, passed and guns are silent all over Libya; the coastal road has been opened, and domestic commercial inter-city flights have resumed. The Commission has drawn up its own Action Plan to remove thousands of foreign forces and mercenaries now on Libyan soil and, for this, it has visited both Ankara and Moscow: Turkey has its own troops and thousands of Syrian mercenaries while thousands of Russia’s Wagner Group mercenaries are still in Libya. Both Russia and Turkey are among what Stephanie Williams calls the “Berlin Conference” member states. However, little has been achieved in terms of actual departure of any foreign troops.

Are Libyans going to the polls this year? While Mrs. Williams did not answer this question directly, it is her big goal, as well as that of millions of Libyans to see elections take place by June this year.