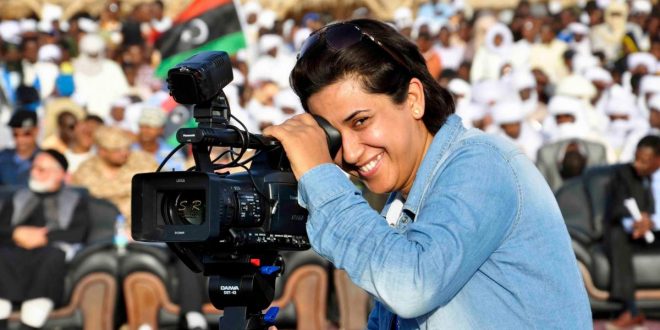 The United Nations Support Mission in Libya (UNSMIL) has condemned the attack on the 218 TV channel’s reporter in Benghazi, Mabrouka Al-Mismari, while she was performing her work, after she was subjected to verbal and physical assault.

UNSMIL called for comprehensive investigations into such attacks and for the perpetrators to be brought to justice, calling for the protection of all journalists and media professionals across Libya so that they can perform their duty without fear.

Meanwhile, the Libyan Women’s Forum for Peace condemned the attack on the journalist, Mabrouka Al-Mismari, a correspondent for 218 TV channel and a founding member of the Libyan Women’s Forum for Peace, by an armed group in the city of Benghazi on Friday evening, which caused the breaking of her personal cameras, in response to the broadcast by 218News last Thursday, of an episode of “Al-Bilad” program tackling the alliances behind the formation of the new executive authority.

The forum called on the relevant security authorities in Benghazi to prosecute the perpetrators, and hold them responsible by bringing them to justice, saying that once again, it stands against attacks and violations against Libyan journalists, including kidnappings, arrests, and enforced disappearances by armed groups and formations throughout the country, in light of the continuing state of impunity as a result of the collapse of the security services and the weakness of the justice system, which has become unable to prosecute the perpetrators.

The Libyan Organization for Independent Media, the Libyan Institution for Investigative Journalism, and the Libyan International Institution for Human Rights condemned the attack against Al-Mismari, and described in a joint statement what happened as a “heinous crime” against the press and freedom of expression in Libya, appealing to state institutions to provide the appropriate environment that allows a safe workplace for press freedom and a legitimate and legal cover for media workers.

The National Human Rights Committee condemned what Al-Mismari was subjected to, through a statement describing what is happening against journalists and media professionals in Libya as a “serious setback” to freedom of expression, stressing that freedom of the press is essential to achieving peace, justice, sustainable development, human rights, citizenship and public freedoms.

218 TV channel had previously issued a statement condemning this criminal act. It also held the security authorities in Benghazi responsible for the safety of its correspondents and crew, and demanded that it pursue the perpetrators and bring them to justice to hold them accountable and reveal the plotters and masterminds behind them who are disturbed by the free speech, and target journalists to discourage them from conveying the voice of the people.

The channel’s management also called on the United Nations Mission in Libya and all local and international human rights institutions to immediately intervene to stop attempts to suppress journalists, and to condemn and denounce this cowardly operation, in defense of freedom of speech and expression.