Home / Normal / Libya’s power struggle and the politics of oil 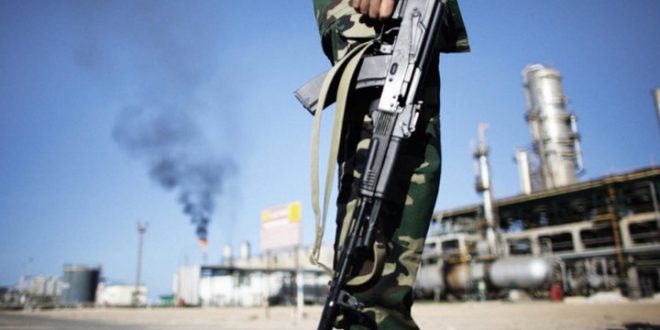 Libya’s power struggle and the politics of oil

Since the eastern-based House of Representatives (HoR) chose a new prime minister to lead the interim government in February fears of a power struggle in Libya have grown.

Dbeibah, who has said he will only cede power to an elected government, was appointed PM in February 2021 as part of the UN-brokered political process to lead national reconciliation and hold elections, which have been postponed indefinitely.

Bashagha, who received the backing of Libyan National Army leader Khalifa Haftar, is seen as a powerful figure in western Libya and has long set his sights on power in Tripoli.

The political standoff is taking place against the backdrop of Russia’s invasion of Ukraine, which has caused a global energy crisis, with Libya’s oil reserves, the largest in Africa, falling hostage once again to domestic and international upheaval.

Oil has often been a tool of leverage in Libya’s civil war, with Haftar’s forces previously blockading oilfields in early 2020.

“The shuttering of the oil fields is a by-product of the acute political crisis currently playing out between the pro-Haftar and pro-Dbeibah camps,” Jalel Harchaoui, a researcher specialising in Libya, told The New Arab.

“The goal is to cause Western capitals to pressure Dbeibah until he leaves. Haftar’s hope is that the international community will feel so anxious to see oil production restored that they will seek to appease him by ostracising Dbeibah until the latter leaves office and flees.”

Dbeibah has called on the Attorney General to open an immediate investigation into the halting of oil operations in key fields and ports and hold those responsible to account.

As part of attempts to prevent a potential armed conflict, the UN had brokered talks in Cairo earlier in April to try to reach a consensus on a constitutional and legislative framework for parliamentary and presidential elections.

The parties failed to reach an agreement, with the UN’s special adviser on Libya, Stephanie Williams, saying they would reconvene after Eid al-Fitr.

Sami Hamdi, the managing director of International Interest, a global risk and intelligence company, says that Haftar, Bashagha, and parliament speaker Aguila Saleh all believe that the international community is not necessarily committed to political ‘legitimacy’ and is more pragmatic than it appears.

“It is in this vein that they believe that if they can impose themselves forcefully by getting Bashagha into Tripoli, coaxing enough militias to support him, and demonstrating that they are in de facto control of Libya’s vital resources, then the international community will either abandon the legitimacy of Dbeibah, or undermine it by recognising Bashagha in some form,” Hamdi said.

Experts also point to the danger of recent actions by pro-Haftar forces, which could seriously jeopardise economic stability in the country.

“Libyans are already finding it hard to afford basic groceries. Due to a devalued dinar, prices will rise, and people will suffer more. Wages may not be paid for months.”

While one of the key reasons for the oil blockade is to oust Dbeibah, another factor at play is the transfer of $8 billion in oil revenues to the Tripoli government after an agreement with the National Oil Company on 13 April.

“This financial exchange between the NOC and the Government of National Unity meant an injection of dollars intoTripoli’s coffers: this shot in the arm strengthens Dbeibah’s financial viability over the coming weeks,” Harchaoui said.

“That is why Haftar and his supporters are so angry. They want the Dbeibah government to be stifled and remain so until it collapses entirely.”

While the Libya researcher thinks that it is still possible for a peaceful outcome to current tensions, many obstacles remain.

“Given the speed with which Haftar is losing patience we are also in a situation that could easily escalate into a full-blown war,” he told the TNA.

Haftar, Aguila, and Bashagha believe that the oil blockade will undermine the support Dbeibah enjoys within Tripoli by aggravating the economic situation and making it difficult for Dbeibah to pay salaries.

“Dbeibah has often relied on promises of ambitious economic projects to improve his standing in public opinion,” Hamdi says.

“Meanwhile, Haftar, Aguila and Bashagha believe that the economic pressure will force the international community to take their government more seriously and force them into a position in which they reverse their insistence on Dbeibah’s legitimacy in order to reach a new compromise that ‘respects’ the power dynamics.”

According to Sewehli, there is also an issue of Western hypocrisy in Libya. On one hand, the West opposes Russian interference, on the other, they refuse to condemn Haftar for his alliance with the Wagner mercenary group.

While the international community has warned time and again that it will impose sanctions on peace spoilers and actors who sabotage the oil industry, no steps have been taken against the LNA leader, emboldening him to repeatedly threaten war or blockade oil production and exports.

However, for other foreign powers deeply involved in Libya’s civil conflict this could be a risky endeavour.

“Although indisputably and deeply dependent on Russia, Haftar sits at the top of the so-called Libyan National Army, the sole viable security structure in Libya’s eastern province, the vast expanse adjacent to Egypt,” Harchaoui says.

“Consequently, many foreign capitals perceive any attempt to shake this inextricable association between Haftar and Moscow as a destabilising threat for the area,” he added.

“Owing to that basic structural reason, the decision to go after the Russians in Libya is a difficult decision to make.”

While the UN, US, and the UK all supported the Skhirat agreement in 2015 to form a national unity government, the US demonstrated a willingness to work with other influential factions in Misrata and with Haftar to secure short-term aims after Fayez al-Sarraj’s government failed to impose itself.

“In 2019, Washington turned a blind eye to Haftar’s offensive in Tripoli, hoping that a military victory for the warlord would end the ‘headache’ of Libya. When that failed, they brokered a new political dialogue hoping to force through elections and prevent Russia from capitalising,” Hamdi says.

“However, after the failure of the elections, they are now facing an absence of any absolute legitimacy in Libya and pragmatically seeking to create a new one. It is in this context that Haftar continues to remain relevant.”