Al-Juwaili’s deputy will serve as acting head of military intelligence until a successor is named by Dbeibeh, reads the document.

This notably comes in the aftermath of clashes between pro-Dbeibeh forces and others loyal to Prime Minister Fathi Bashagha, which appears to have managed to enter the capital in early Tuesday morning. 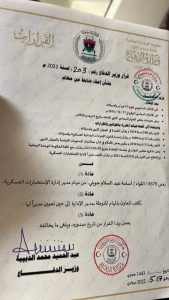 Security ForcesSecurity Situation
All
2022-05-17
asaeid
Previous Following Bashagha’s failed attempt, GNU vows such acts would be tackled with vigour
Next Libya’s Bashagha says will base his rival gov’t in Sirte