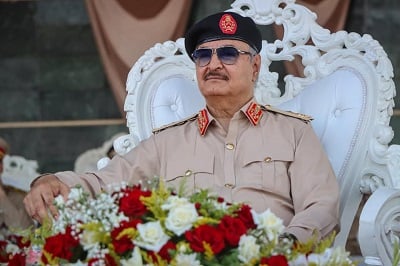 Haftar’s lawyers resign from war crimes case in US court

The legal team defending Libyan general Khalifa Haftar against war crimes charges in a US federal court has resigned, according to a Washington-based Libyan human rights defender.

“The legal team of defendant Khalifa Haftar submitted a formal request to the federal court in Virginia, to exempt themselves from representing the accused,” Emadeddine al-Montasir told Arabi21 on Friday.

Haftar and his forces stand accused of committing torture and war crimes during the period from 2016 to 2017, according to several lawsuits filed against him by Libyan citizens.

“According to the team, continuing to defend Haftar will mean shouldering a financial burden the firm cannot bear,” he continued.

Al-Montasir is a vocal opponent of Haftar’s military actions in Libya since his ascendancy in 2014 and has been following the case closely.

“Haftar’s lawyers noted that their client can appoint a new legal team or plead his own case in court if necessary – but that they have notified him of their resignation and the repercussions that will have,” he said.

The human rights campaigner believes that the court is likely to pronounce a judgement in absentia, after months of obstructions, silence and delays by Haftar and his team.

“If Haftar appoints a new legal team – for the third time – they may try the same tactics, but it’s likely to be a tough challenge given the procrastination and delay so far” al-Montasir concluded.

Khalifa Haftar lived in Virginia for many years and has a number of expensive properties in the area, according to court documents.