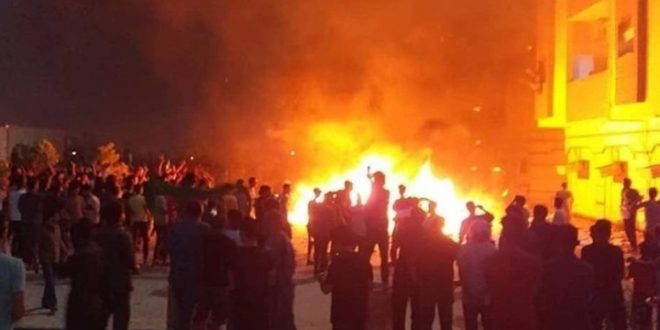 Several television channels reported on Friday that protesters had managed to penetrate the parliament building and committed acts of vandalism, while media outlets showed images of thick columns of black smoke coming from its perimeter as angry young protesters burned tyres.

Other media reports said part of the building had been burned. The parliament building was empty as Friday falls on the weekend in Libya.

“We want the lights to work,” protesters chanted.

Earlier on Friday, demonstrations also took place in other cities, al-Wasat reported. In the capital Tripoli, in the west of the country, several hundred people gathered in a central square, where they protested against armed militias and demanded a better electricity supply and lower bread prices.

Images from the protest in Tobruk in the east of the country showed a protester driving a bulldozer that had managed to smash through part of a gate, allowing other demonstrators to enter the parliament building more easily. Other protesters, some brandishing the green flags of the Gaddafi regime, threw office documents into the air.

Libya has endured several days of power cuts, worsened by the blockade of several oil facilities against the backdrop of political rivalries.

Lawmaker Balkheir Alshaab told Libyan channel Al-Ahrar, “We must recognise our failure and immediately withdraw from the political scene”.

Libya’s parliament, or House of Representatives, has been based in Tobruk, hundreds of kilometres east of the capital Tripoli, since an east-west schism in 2014 following the revolt that toppled longtime leader Muammar Gaddafi three years earlier.

Libyan news website al-Wasat reported that the protesters in Tobruk were demanding the dissolution of parliament and new elections. At the same time, the protests were also directed against the poor living conditions in the country.

Recent weeks have also seen repeated skirmishes between armed groups in Tripoli, prompting fears of a return to full-scale conflict.

Two governments are currently vying for power in Libya.

In the capital, Tripoli, the leadership is led by interim Prime Minister Abdul Hamid Dbeibah. At the same time, the government of former interior minister Fathi Bashagha claims power for itself. The latter is allied with the parliament in Tobruk, in the east.

A peace process beginning in 2020 has tried to knit the country back together. However, after a scheduled election was halted in December, the eastern-based parliament said the interim unity government of Abdul Hamid Dbeibah had expired and it appointed Fathi Bashagha to replace him.

Earlier this month, intense fighting broke out between two influential militias from western Libya. Local media identified the armed groups as the Nawasi Brigade – a militia loyal to Bashagha – and the Stability Support Force, which backs Abdul Hamid Dbeibah.

No motive for the fighting was immediately apparent, but it was the latest violence to rock the country as two rival prime ministers vied for power.

The United Nations said Thursday that talks between the rival Libyan institutions aimed at breaking the deadlock had failed to resolve key differences.

While some progress was made, it was not enough to move forward towards elections, with the two sides still at odds over who can stand in presidential elections, said the UN’s top Libya envoy Stephanie Williams, who facilitated the talks.