Home / Normal / Libyans are protesting. What can they learn from the events rocking Tunisia? 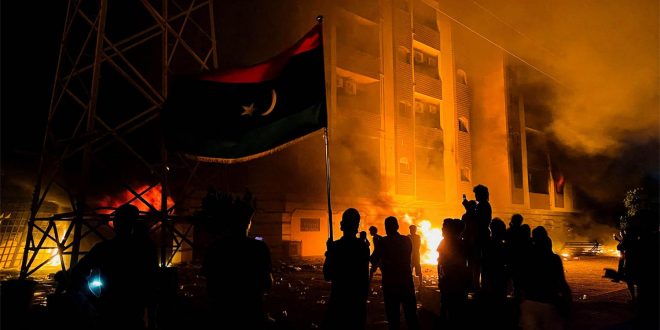 Libyans are protesting. What can they learn from the events rocking Tunisia?

Tunisia is experiencing one of its most difficult moments since its independence from France in 1956. On July 25, Tunisians will be called to express—through a referendum—their acceptance or rejection of a new constitution proposed by President Kais Saied to seemingly transform the country from a parliamentary system to a presidential one.

However, the truth is that Tunisians are being called to express their opinion on whether Saeid’s actions to freeze parliament and rule by decree, undertaken nearly a year ago, constitute a legitimate intervention by the highest institution of the republic or simply a coup d’etat. Saied claims he is attempting to prevent the collapse of the Tunisian state due to the corruption and incompetence of its legislative and executive branches.

The reasons that contributed to this situation are many and complex. However, one aspect has been given less attention: the relevance of the constitution in the eyes of the average Tunisian citizen. After the 2011 Arab uprisings, Tunisians elected a new parliament for the first time, which was tasked with writing a new constitution. The elections were held under the authority of a temporary ‘mini-constitution,’ paving the way for the country’s first general elections; a classic bottom-up approach, as those in charge of drafting the constitution were directly elected by the people.

Moreover, to further enhance this bottom-up approach, experts were hired to collaborate with multiple committees working on the charter’s many articles. Frequent polls were conducted to obtain citizen’s opinions on said articles. The final product was very satisfactory and almost universally hailed as a good charter. Nevertheless, the constitutional charter in and of itself couldn’t prevent the rapid precipitation of a system that soon became plagued by corruption, incompetence, and overwhelming personal ambitions. Similarly, the system couldn’t avoid the power-grab of President Saied, his dismantling of the current constitution, and the drafting of a new one. Calling Saied’s actions a “top-down approach” would be an understatement.

What can the average Libyan citizen learn from this Tunisian experience? First, discussions—held at every level of the socio-political ladder—on the necessity of Libya having a constitution before elections were precisely and only that: talks. In other words, it was meaningless chatter by politicians who were only interested in maintaining a status quo that solely favored themselves and their immediate acolytes.

Another lesson that can be learned is that elections—no matter how universal or free and fair—neither guarantee the selection of the best elements of government nor the overcoming of deep cleavages within society, such as the secularist-Islamist divide. On the contrary, they crystallize divisions. The Libyan elections of 2012 represent a classic example. The results of the elections linked the interests of politicians and armed groups with the same ideology and they coalesced into a confrontation against other groups rather than engaging in constructive talks.

Finally, relying on generic support from the international community for its democratic process is useless. The silence from the western capitals on the occasion of President Saied’s ‘constitutional coup’ on July 25, 2021 is clearly emblematic of this.

The demonstrations on July 1 in Libya were due not only to the population’s anger because of frequent electricity cuts and higher prices on food and everyday goods, but also to a general tiredness with the misbehavior of the political class. This resulted in the torching of the Libyan House of Representatives in the port city of Tobruk. The Parliamentary Assembly, elected in 2014, has reached a high level of unpopularity. This confirms that the Libyan population has observed the situation of its western neighbor, Tunisia, and understood, albeit mostly unconsciously, what is really going on. Drafting the constitution and holding a referendum for its adoption simply masks the stark reality that people have been deprived of their right to self-governance.

The silence of the West

Libyans are taking to the streets to reclaim what they fought for in 2011, but that has been stolen by a class of discredited, self-serving, and corrupt individuals and their foreign backers. The silence of the international community on the demonstration’s real raison d’etre and their emphasis on the necessity for the protesters to use “restraint” and keep demonstrations “peaceful” confirms the ruling elites’ inability to understand the real reasons behind the angered Libyans, further confirmed by a United Nations statement on July 2 and statements by the United States and the European Union. The United Nations, along with the numerous countries that signed the 2020 Berlin Agreement’s goal to transition Libya into a pluralistic system, are now being called on to take advantage of the chance offered by this outburst of popular frustration. They should ride the population’s discontent and pressure, if not force, the Libyan ruling class to step aside and allow the natural evolution of the Libyan polity.

There aren’t many methods to choose from to obtain a real bottom-up process to reach a solution to the stalled transition issue. One option—with some modifications—could be to return to the road map pre-April 4, 2019, when General Khalifa Haftar, the leader of the Libyan National Army, attacked the capital, Tripoli, where the Government of National Accord is located. This road map foresaw the realization of a National Conference that proposed consistent participation of representatives from every sector of Libyan society. This would’ve occurred during a two- or three-day discussion of main values and principles upon which all Libyans had to adhere to. Only after this shared foundational pledge could an electoral process follow.

Another alternative is the National Assembly variant. Here, representatives from each Libyan city (in numbers compatible with the respective population) are sent to Tripoli to participate in a National Assembly, which is tasked to act as a de facto legislative and constituent chamber.

International actors should agree on which of these two ways forward would be best for Libya and, unlike the general and vague support they have demonstrated so far, engage in strong actions to specifically support this approach. The Tunisian case provides good, willing Libyans and the international community the opportunity to do more than limit themselves to redundant generic statements—they can act decisively to avoid a worse crisis.