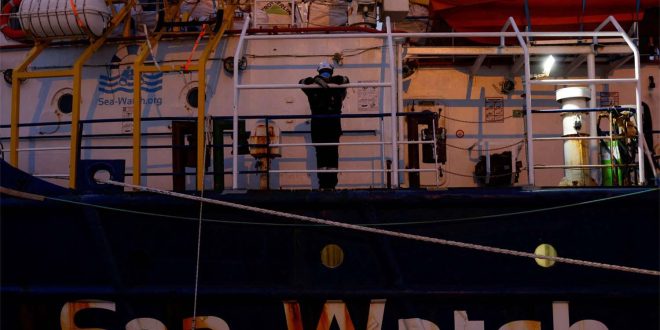 The German non-governmental organization Sea-Watch on Wednesday accused the Libyan coast guard of threatening to shoot down their monitoring plane that helps the group document the interception of migrants in the Mediterranean Sea.

According to an audio recording of the threats, the Libyan coast guard vessel allegedly ordered the NGO plane to “get out of Libyan territorial” waters despite being in international waters where Malta is responsible for coordinating search and rescue operations. The incident occurred Tuesday.

“Get away from Libyan territorial otherwise we’ll shoot you by some missiles,” the Libyan Coast Guard vessel allegedly responds back.

The Libyans ultimately pulled dozens of migrants onto their vessel and proceeded to shoot the rubber boat with what appeared to be incendiary ammunition, setting it on fire, according to footage of the interception released by Sea-Watch.

A spokesman for the Libyan coast guard did not immediately answer phone calls and messages seeking comment. Maltese authorities have also not yet responded to questions sent by AP via phone and email.

It is not the first time European NGOs operating in the Mediterranean reported threats or violent behaviour by the Libyan Coast Guard. Last year, the European Union-funded and trained Libyan coast guard was caught on camera chasing and shooting in the direction of a migrant boat.

The Central Mediterranean is known as the deadliest migration route in the world with nearly 3,000 deaths since January 2021 according to the International Organization for Migration.

The EU, Italy and Malta have for years been criticized for outsourcing migrant interceptions and rescues to the war-torn country.

Upon their return to Libya, migrants and refugees are held in government-run detention centers where torture, rape and killings have been documented extensively. A U.N. fact-finding mission has found that the systemic abuse of migrants there may amount to crimes against humanity.